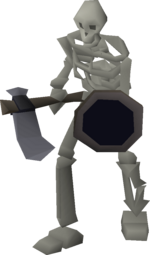 Giant skeletons are a more powerful variant of skeleton found in the Shadow Dungeon, which can be accessed using a ring of visibility during or after the Desert Treasure quest. They are seldom killed due to their significantly higher combat stats than regular skeletons, being located in a multicombat area, as well as lacklustre drops. As with most monsters in the Shadow Dungeon, they allow other monsters to pass through them.

Like other Undead, giant skeletons are susceptible to the effects of the Salve amulet and its variants, as well as Crumble Undead.

For unknown reasons, the giant skeletons with a sword only drop big bones and the default items (curved and long bones, and the champion scroll). They do not roll the main table.

Drop rates estimated based on 12,358 kills from the Drop Rate Project, unless otherwise cited.