From Old School RuneScape Wiki
Jump to navigation Jump to search
The RuneScape Wiki also has an article on: rsw:Gilded altar
The official worlds for Gilded Altars are worlds 330 (US East), 465 (Germany), and 512 (UK) (P2P).
Gilded altar? (edit) 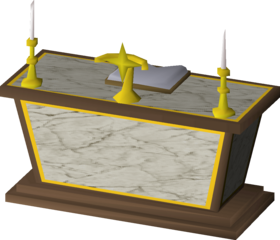 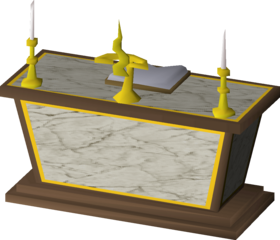 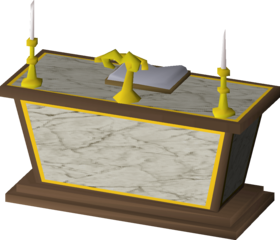 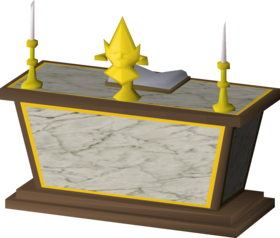 A gilded altar can be built in the Altar space of the Chapel in a player-owned house. It requires 75 Construction to build and when built, it gives 2,230 experience. The player must have a hammer and a saw in their inventory to build it.

Any incense burners can be used to gain the same amount of experience, provided that they are lit with Marrentill herbs.

It can be built as early as level 67 by using a Crystal saw (+3 boost to level) and orange spicy stew with three doses of Orange spice (+5). However this could be difficult to achieve due to the random boost that the orange spicy stew provides.

An option with guaranteed success requires 69 Construction and a POH tea (+3) (from Teak shelves 2) which, combined with the crystal saw, gives a total boost of +6.

Rimmington and Yanille on World 330 also often host open altars, so this world is commonly used for training Prayer.

It is easier and faster to use the Rimmington house portal, as the player can get bones un-noted by Phials in the general store just south of the portal for (5 each noted item).