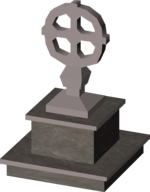 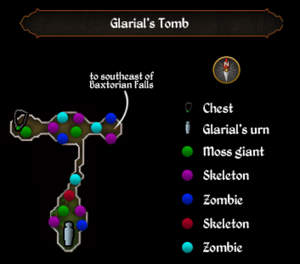 Click to view a larger version (opens on a new page)

Glarial's Tomb is a dungeon underneath the tombstone near the Baxtorian Falls and Kingdom of Kandarin. To enter, the player needs Glarial's pebble, which is obtained during Waterfall Quest, and must not have any weapons, armour or runes either equipped or in their inventory. Level 84 moss guardians roam here.

The location is close to the Fishing Guild; use Glarial's pebble on her tombstone and you may enter. Players can get Glarial's amulet in the west chest. This location can be re-entered after the Waterfall Quest has been completed in order to obtain Glarial's amulet once again.

Glarial's tomb is also involved with the Roving Elves quest. The player has to kill a moss guardian completely unarmed and unarmoured (food and potions are allowed) to obtain a consecration seed.

The tomb has a roaming mysterious ghost outside of it named Valdez, who can only be seen when wearing the Ring of visibility. This ghost starts the Curse of the Empty Lord miniquest.

Items not allowed here include: