Glough (pronounced /glʌf/"GLUHF"[1]) is an ill-natured, misanthropic gnome who tries to take over Gielinor. In the Grand Tree quest, he can be found just south-east of the starting point of the Grand Tree; look for a ladder to the East of the ramp (between start of the quest and the agility course) that leads to Glough; take this ladder up to find Glough on the second floor.

Glough's schemes are thwarted in The Grand Tree quest, and once again in Monkey Madness I. He used to be the head tree guardian of the Tree Gnome Stronghold. He makes his first unsuccessful attempt on the player's life when he summons a black demon to kill them in The Grand Tree, and again in Monkey Madness I when it is discovered he has another "pet", the jungle demon, that he uses to further his schemes, which is destroyed by the 10th Squad. During Monkey Madness II, the player manages to break the alliance between Glough and the monkeys by sabotaging Awowogei's forces, along with his alliance between the ogres and trolls. Becoming increasingly deranged and desperate, Glough launches an attack on the Grand Tree by himself. He eventually meets his end at the hands of the player after a great skirmish, but not before killing Nieve.

Fighting Glough during Monkey Madness II while on a Greater Demon Slayer task will count towards the task.

King Narnode Shareen sends the player on a mission to discover why the Grand Tree is dying. Little do they know that the wheels of Glough's dreams of world domination and hatred of humans have been put in motion, and is in the process of preparing an armada of warships to strike at the heart of the human kingdoms.

In The Grand Tree, players discover that Glough has hired a man named Charlie to steal the Daconia rocks—magic stones kept by one of the original creators of the Grand Tree, Hazelmere, that can be used to wound and even kill the Grand Tree—so that he can frame him as the one who is responsible for the dying Grand Tree. Glough has used these rocks on the roots of the Grand Tree to wound it. In framing Charlie, he attempts to convince King Narnode that humans are trying to destroy the Grand Tree, which the King initially believes, so Narnode prepares for war against the human kingdoms.

The player eventually finds evidence of Glough's culpability in these plans and discovers that Glough has contracted workers to construct large warships in a distant Ship Yard to invade the human territories and attempt to control the world. After presenting this evidence to the King and following an investigation of Glough's estate by the King's subjects, the King explains that all they found were a couple of sticks. When the player deciphers the meaning of these sticks and takes them to their intended area, the player finds themselves entrapped by Glough who sets a black demon on them. The player kills the Demon and finds King Narnode at the end of the passage with his troop inspecting the roots and finding the rocks. Under the weight of all of this evidence, King Narnode has Glough placed under house arrest and cancels the invasion.

Meanwhile, an angry Glough plots his revenge against the player.

King Narnode sends the player to investigate the disappearance of the elite 10th squad, who were tasked with decommissioning the Shipyard where Glough was preparing an armada to attack mankind. It turns out that the 10th Squad crashed on a small island south of Karamja due to powerful winds that damaged their gliders. When most of the squad leaves the island to inspect a nearby atoll that had been spotted prior to the crash, several of them are captured by sentient apes who imprison them. Some of the 10th squad successfully escape, while two conduct espionage and three others work on carrying out a rescue operation for those captured.

When Daero gives the player a puzzle box to solve, the player can alternatively bring it to Glough to have him solve it for them. However, Glough will charge the player 200,000 coins before nearly completing the puzzle for them, not completing it as it would have set off an alarm.

In Monkey Madness I, players discover that G.L.O. Caranock is continuing Glough's plans for warfare with the humans, in the apparent absence of a confined Glough. King Awowogei, the leader of the apes, is eventually found to be conspiring with Glough's henchmen to attack mankind. By utilising a technological breakthrough privy only to Glough and his circle, they will be able to teleport all of the 10th squad to an arena with an enormous Jungle Demon to have them killed off. Fortunately, the squad commander, Sergeant Garkor, learns of their intent before they act on it, and with a bit of ingenuity, enables the player to teleport with the 10th squad when it happens. The demon is defeated, and it appears that Caranock's and Awowogei's plans are foiled for the time being.

After Monkey Madness I, Glough can still be found in his treehouse, and when spoken to, says, "Mark my words, the monkeys are listening". This is a hint towards the Monkey Madness II quest.

Glough mysteriously disappears from house arrest, which prompts King Narnode to send the player to find out what he is plotting. It is soon revealed that Assistant Le Smith had smuggled him out of house arrest and dropped him off at Ape Atoll.

Glough has been experimenting with the monkeys and gorillas of Ape Atoll with an unknown mutagen. Awowogei was unaware of this, and had simply labelled it as Kruk's "secret weapon". When the player arrives on Glough's airship disguised as Kruk, Glough tells them to send the remaining three tortured gorillas back into their cages, as they had broken out. After the gorillas are thrown back into the cage, Glough tells them that the mutagen is almost perfect, and that he is aiming to create a mutagen that makes the applicant more aggressive, but obedient to the controller. He leaves the player to find Le Smith; the player quickly sabotages the onyx charging the mutagen.

After finding Le Smith, Glough hears about the monkeys backing off their attack. Despite this, he still continues onward. While on the airship, the tormented gorillas break out and crash the ship. Glough manages to survive the crash and takes his best "experiments" into a cavern. When the player and Nieve arrive, Glough realises that the player had been foiling his plans all along, and sends his two tortured and demonic gorillas at them; however, the player and Nieve are able to defeat them. Glough becomes angered and drinks the remaining mutagen to finish off the player and Nieve. Nieve attempts to stop Glough, but the mutated Glough slams her into a wall and stomps the ground, causing a boulder to crash and kill Nieve. 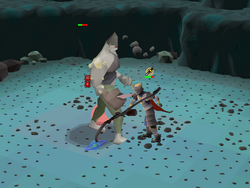 The player fights a mutated Glough.

After a very long battle between the mutated Glough and the player, Glough is eventually defeated. However, the cavern becomes increasingly unstable due to Glough's actions and collapses, presumably killing him.

After the quest, Glough can be refought for challenge purposes by gazing into the burning brazier in Zooknock's house in western Gnome Stronghold. This fight will record the fastest kill time, and counts for a Combat Achievement with no additional rewards.

Glough is mentioned in Gnomish language on My notes page 13.

It has been partially translated as follows with the translation book:

"The eye of Glough of The Guardian Tree Land for, the idiot, no gnome but Glough has begone to become the Stone City Guardian!"