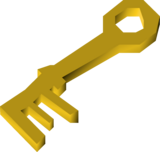 Glough's key is an item used during The Grand Tree quest. It opens a chest in Glough's home just south of the Grand Tree. The player finds invasion plans in the chest which can then be shown to King Narnode Shareen as evidence.

Players obtain this item by talking to Anita in the Tree Gnome Stronghold. Her home is in the north-west of the stronghold, just west of the swamp. The key has no use after the quest.