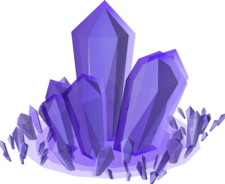 Glowing crystals are large clusters of crystals found in Vasa Nistirio's room in the Chambers of Xeric. These crystals were used by Xeric to bind the former High Priest after he attempted to usurp him, eternally imprisoning his avatar in the chambers.

Four crystal clusters are found within the room, one spawning in each corner. Throughout the fight, Vasa will move towards a crystal which visibly brightens. The crystal heals Vasa and regenerates any drained defence levels once he reaches it, so it is important that players neutralise each one as quickly as possible to minimise the amount of healing he can receive. They are weak to stab attacks, immune to ranged damage (including the ranged thrall), and take 1/3rd damage from magic attacks.

After healing enough, Vasa will use his special attack upon returning to the middle of the room. Otherwise, he will walk to another set of glowing crystals; this will always be a different crystal than the previous one unless the special attack was just used.