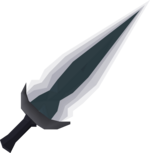 The glowing dagger is a quest item obtained and used during the Legends' Quest. It has the same combat stats as an iron dagger, only lacking the +4 strength bonus.

It is created when players are given the dark dagger by Echned Zekin, requesting them to kill Viyeldi because he was the one that murdered him and wants revenge. Once the dagger is used to kill Viyeldi, it will convert the into a glowing dagger. It must then be taken back to Echned Zekin, who will reveal his true form - the demon Nezikchened.

Players can obtain another glowing dagger after the quest by speaking to Radimus Erkle in the Legends' Guild, and can be investigated via-right click afterwards to switch its appearance between a dark or glowing dagger.