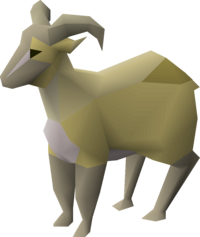 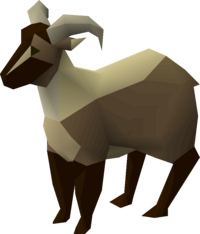 A Goat is an animal found in the Kharidian Desert south of Al-Kharid. They drop horns used in Herblore to create Combat potions. The greatest amount of spawns are south-west of the Kalphite lair (accessible via fairy ring BIQ; however, the goats near Nardah are much closer to a bank.

Note that after completing the easy set of the desert diary, the desert horn will always be dropped as a note rather than the actual item.