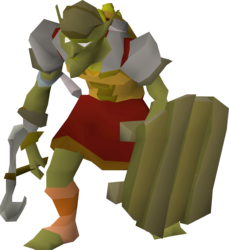 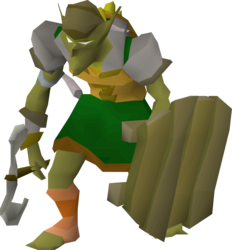 The goblins of Goblin Village are a specific tribe of goblins which seem to be at war amongst themselves over which colour their armour should be. During the Goblin Diplomacy quest, the village leaders General Bentnoze and General Wartface temporarily settle their dispute over armour colour by choosing to wear brown goblin mail instead of the red or green armour, but as becomes evident directly after this quest, this settlement only lasts very shortly. This can also be seen by the continued infighting within the tribe.

Unlike most other goblins in the game, players can talk to the goblins in Goblin Village, which typically leads to a short conversation about the colour of their armour.