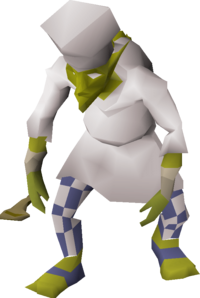 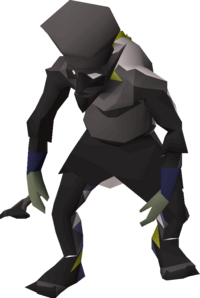 The Goblin Cook, whose name is Mudknuckles, is a goblin chef who works in the kitchen under the Goblin Village. He is always experimenting and blowing things up in his kitchen, hence his frequent blackened appearance. When he is first met, he has just invented 'fast food', which is completely burned food delivered quickly through an explosion and the cauldron being launched in the air, arriving speedily at its destination (and likely destroying it).

He plays an important role in the Recipe for Disaster quest, as the player needs him to make a slop of compromise to save General Wartface and General Bentnoze from the Culinaromancer's spell.