From Old School RuneScape Wiki
Jump to navigation Jump to search
The RuneScape Wiki also has an article on: rsw:Goblin Champion's scroll 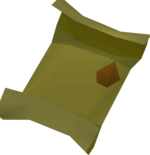 The goblin champion scroll is an extremely rare drop from goblins. It contains a challenge from the Goblin Champion. In order to be eligible to receive the scroll, players must be on a members server and have 32 quest points.

By bringing this scroll to Larxus in the basement of Champions' Guild, players may fight the Goblin Champion as part of the Champions' Challenge minigame. During the fight, players can only use Magic attacks.

Obtaining the Champion scroll for the Goblin Champion is probably the easiest compared to the task of getting one from any other creature. This is due to the fact that goblins have the least amount of hitpoints out of the ten kinds of creatures that drop Champion scrolls.

A common spot where you can cannon goblins is just west of the windmill in Lumbridge.

A weapon with the highest possible attack speed should be used. This includes throwing knives, darts, or a toxic blowpipe. It may be economical enough, however, to use something such as mithril darts. Equip gear to increase your ranged bonus as much as possible, as this will also increase the accuracy of your cannon's shots. It is also recommended to equip your best available Ava's device or a ranging cape.

The following text is transcluded from Transcript:Goblin champion scroll.

Fight me if you think you can human, I'll wait for you in the Champions's Guild.