From Old School RuneScape Wiki
Jump to: navigation, search
The RuneScape Wiki also has an article on: rsw:Goblin fish
This article is about the fish. For the item, see loach.
Goblin fish 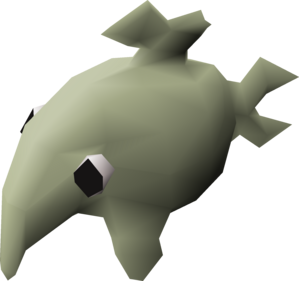 Goblin fish, or loach, are a species of subterranean fish native to the Dorgeshuun city of Dorgesh-Kaan. They are named so because they are found in the goblin city. Loaches, a dish eaten in the Dorgesh-Kaan marketplace, which appear very similar to goblin fish, can be obtained by exchanging with gourmets in the city's marketplace, suggesting that the goblin fish is a species of loach and often a food source of the Dorgeshuun.

Goblin fish are, much like the Dorgeshuun, very pale from their centuries beneath the surface. They are extremely small, and given their environment may be blind or nearly blind. They are also a popular delicacy of the Dorgeshuun, who serve them hot and steamed.

Unlike most fish, goblin fish cannot be caught with the fishing skill. They can only be found in the shallow pools of Dorgesh-Kaan, north and south of the city's marketplace. Occasionally, goblin fish can be seen jumping from the water and landing back in every eight seconds.

A goblin fish jumping out of the water.
Retrieved from ‘https://oldschool.runescape.wiki/w/Goblin_fish?oldid=12142422’
Categories:
Hidden categories: