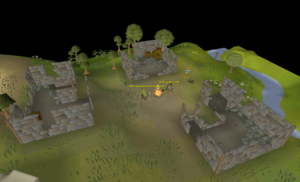 The goblin settlement also has one of the entrances to the Observatory Dungeon, which is similarly overrun by goblins.

There is a hard Treasure Trails map clue for the area, in which the player must search the crate near the dungeon entrance in order to progress the clue.