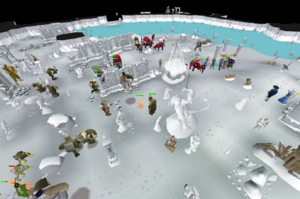 The God Wars Dungeon, a remnant of the conflict of the God Wars, where four godly factions fight.

The God Wars was a time of great calamity in Gielinor. The war lasted approximately 4,000 years, spanning the entire Third Age, which is synonymous with the God Wars.

During the Second Age, Zaros and his empire had almost complete control of the world. When he was betrayed and defeated by Zamorak, the Second Age ended, and the other gods began fighting for power, land and influence. However, many gods, the most significant being Saradomin and Zamorak, wanted complete control.

Soon after Zaros's defeat, a massive war broke out. The gods, at the time, could directly interact with the world, which caused destruction far beyond any seen before or after the wars. During the wars, countless civilisations, races, and animal species disappeared. Many were destroyed, while others hid themselves or went under drastic changes in order to survive. A great deal of the world itself changed, with the land being ruined or reformed. Many of these changes were so catastrophic that they continue to affect RuneScape even today.

In fact, the entire world was on the brink of destruction when the fighting awoke Guthix from his sleep. Upon the end of the First Age, Guthix went into a deep slumber that stretched over many millennia. When he awoke, he found his world in ruin. He was so enraged that he instantly ended the fighting and demanded that the gods stopped fighting their wars on Gielinor, and to continue to hold influence only through their followers. Most of the gods were banished by the Edicts of Guthix. It was at this time that the Third Age, which had lasted approximately 4,000 years, finally ended, beginning the Fourth Age.

Every race, god, and civilisation of RuneScape was forced to fight in the God Wars at some point. While some fought constantly in the wars, others were quickly destroyed or hid themselves. Below is a partial list of significant individuals that fought in the war, although there were many more whose names have been forgotten or are who played a somewhat lesser role than those listed here.

The God Wars gave birth to many historical battles and events, which shaped the Gielinor we know today. Listed below are known events that took place during the wars, although there are many others that have long since been forgotten.

During the God Wars there were thousands of battles and wars between the people of RuneScape. Although many battles and wars of the Third Age have been forgotten, some of the more significant battles are still remembered today, such as the ones listed below. Please note that although these battles are more or less in order, there may be some that are slightly out of place.