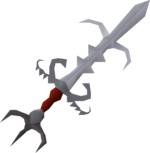 The godsword is a powerful two-handed sword that was originally released on 28 August 2007, along with the God Wars Dungeon. It was added to Old School RuneScape on 17 October 2013. Requiring 75 Attack to wield, it carries the highest slash bonus of any weapon. The godsword consists of a godsword blade, to which a godsword hilt is attached. There exists one hilt for each of five of RuneScape's gods: Armadyl, Bandos, Saradomin, Zamorak, and Zaros. Consequently, there are five different godswords: the Ancient godsword, Armadyl godsword, the Bandos godsword, the Saradomin godsword, and the Zamorak godsword. All five godswords have identical stats, but each has a different special attack, as detailed below.

The godsword is created by smithing the three different godsword shards into a godsword blade at an anvil. Doing so requires 80 Smithing, and gives a total of 200 Smithing experience. A godsword hilt is then attached to the godsword blade, which requires no stats and can be done by any player. Hilts can be attached or removed at will, at any time. Godsword hilts are dropped exclusively by the generals within the God Wars Dungeon and godsword shards are dropped by their bodyguards.

Somewhere near the end of the God Wars, during the Third Age, Zamorak had gathered armies so powerful that his victory seemed inevitable. In a last-ditch effort to oppose him, Saradomin formed an alliance with Armadyl and Bandos. They created the godsword, a weapon meant to ensure Zamorak's final defeat.

A group of Armadyl's aviantese was given the task of delivering the godsword to the army of Saradomin, which stood ready to do battle with Zamorak's forces. However, an aviantese had previously been captured by Zamorak's rangers, and it is believed that K'ril Tsutsaroth himself tortured the hapless aviansie for information. Having learned of the godsword's existence as well as its destination, Zamorak laid an ambush for the aviantese transporting the godsword. At the same time, he launched an attack against Saradomin's army with his own forces.

Upon coming under attack, the aviantese carrying the godsword retreated into a temple beneath the mountains, and set up a defence against Zamorak's forces in an attempt to protect the godsword. Bandos and Saradomin sent portions of their armies into the temple as reinforcements for the aviantese, and for a time the three groups fought as allies against Zamorak's minions. However, as the battle wore on, old distrust between the forces of Armadyl, Bandos, and Saradomin resurfaced, and the forces of the three gods turned on one another, dissolving the alliance. The battle in the temple became a four-way free-for-all for control of the godsword; it is believed that during this great melee, the godsword was shattered into four pieces.

It was then that Zamorak cast a mighty spell with such power that all of northern Gielinor, much of Zaros's old territory, was destroyed, transforming the once-tranquil land into the desolate and hellish Wilderness. This spell also caused the entrance to the temple beneath the mountains to collapse, sealing the four armies inside. However, the struggle for the godsword continued.

Before the battle could drag on any further, Guthix awoke from his deep slumber. Furious at the ruin that the God Wars had wrought upon the world, he forced the four warring gods to cease their battles in Gielinor, and erected the Edicts of Guthix in order to prevent any further wars between gods in Gielinor. The temple and the armies within were frozen by a follower of Guthix, where they would remain undisturbed for thousands of years, their battle - and the godsword - long forgotten.

However, during the Fifth Age, a combination of tectonic movements within the Wilderness and long rows of fires lit by adventurers thawed the dungeon and the armies within it. Unaware that the God Wars have ended, the followers of Armadyl, Bandos, Saradomin, and Zamorak continue to wage war for control of the godsword. Adventurers are now able to enter the dungeon for themselves and do battle with the armies within. Those who are powerful enough to defeat the mighty leaders can obtain the pieces of the godsword, and reconstruct it for themselves.

Later during the Fifth Age when Nex's Ancient Prison was uncovered, it was revealed she ordered the creation of a godsword during her imprisonment.

The Ancient godsword is the least common type of godsword due to its hilt being dropped by Nex. It has unique special attack, called Blood Sacrifice, in which the target would have eight ticks (4.8 seconds) to move at least five tiles away from the attacker. If the target fails to do so, they will take 25 damage (12 if using Protect from Magic), and the attacker will be healed for the same amount.[2]

General Graardor is the most commonly killed general in the God Wars Dungeon so there is a large supply of Bandos hilts, resulting in the Bandos godsword being a relatively cheap godsword. Its special attack, Warstrike (which uses 50% special attack energy), is often used against other players and powerful boss monsters. Most bosses have extremely high Defence and a large hit from Warstrike can make it significantly easier to kill them. It is especially dangerous against combat pures that have low Defence, as the special attack could potentially drain Strength after draining Defence all the way down to 1.

The Saradomin godsword is most effectively used in monster-killing situations, due to its helpful special attack. Healing Blade can be useful to players who are training Slayer, doing the Barrows activity, or attempting the TzHaar Fight Cave. Along with healing effects such as Guthan's set, the Saradomin godsword can act as a replacement for food. Its prayer restoration can also save players doses of prayer potions.

While the Zamorak godsword's special attack, Ice Cleave, is not particularly useful for general monster killing, it is very effective in a few special cases. One popular use of Ice Cleave is to freeze Commander Zilyana, who has devastating melee and Magic attacks that she will use only at melee range. Additionally, Ice Cleave has a few uses during PvP situations, such as freezing players in place either to prevent their escape or to make it easier to escape them. Rangers and mages can also use Ice Cleave in lieu of Entangle or equivalent to hold their target in place and attack them at a safe distance. During Castle Wars, the Zamorak godsword can be used to freeze players who are carrying the flag, or players who are attempting to capture the flag.

Additionally, as the godsword's freezing effect disables Auto Retaliate on players, players can freeze their target, step away, attack once, then immediately step away again before their opponent can retaliate. This works even against faster weapons such as an abyssal whip.