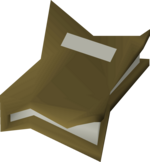 Gollwyn's final statement is a book found in the Grand Library in Prifddinas, which requires completion of Song of the Elves to access.

The book is written by Gollwyn, Arianwyn's father, and describes his experiences during the battle between Lord Iorwerth's forces and Baxtorian's soldiers during The Great Divide.

The following text is transcluded from Transcript:Gollwyn's final statement.

Seren forgive us, and protect the realm. We've made a mistake that could cost us everything.

We'd undertaken this journey under the best of noble intentions, even under divine necessity. I still remember Adwr's wild eyes, holding back tears as he told us of the horrors he'd witness on his mission to Prifddinas. He'd narrowly escaped with his life, something which could not be said about his companions. He sobbed as he recounted the betrayal, the killings, the sacking of the city, the takeover of the Tower of Voices... All of which was on Lord Iorwerth's command.

The news spread quickly, shocking and dividing our people. We called an emergency council on all eastern settlements to discuss what was to be done. While some were content to leave the city to its fate, afraid of what was to come, most of us knew better. Baxtorian reminded us all of Seren's promise to us, and her command to keep the eight clans together. This was enough for the majority to reach a fragile, but unanimous agreement.

Within a few days, we gathered whatever forced we had under my banner and made our way to the ancient Underground Pass, moving towards Prifddinas, moving towards what once had been all of our homes. The plan was Baxtorian's idea. We thought if we mustered our forces through the pass hastily enough, we would be able to catch Lord Iorwerth unprepared while his forces were divided and end this madness before it ended us.

We were wrong. So, so wrong.

We could not have predicted the strength of the evil that would meet us. We should have taken the fell whisperings and ghastly shapes within the tunnel's darkness, just out of true perception, as an omen of danger. Perhaps we were overconfident. Perhaps we were in denial. In any case, we chose to ignore them and travel on, oblivious of the terrors just beyond our sight.

Seven days we travelled, carrying our supplies though[sic] the underground. Seven days of relative safety, seven days of lulling us into a false sense of security. We marched on the gates of Prifddinas on the morning of the eighth day, where everything fell apart.

I do not know how Lord Iorwerth knew of our plans, but his forces were waiting for us. Baxtorian tried to reason with him, but he would not listen. They destroyed almost half our forces before we called a retreat. A further quarter of us were slain by traps within the forest as we fled, left behind in our haste.

We reached the Well of Voyage by nightfall, and that was where all hope was truly lost. I was one of the first who made it through, back to the underground from where we had come. A few of us had already begun to scout ahead when they came again. Not content with defeating us at the city gates, Lord Iorwerth had sent his forces into the pass. That wasn't all we faced though. In the darkness, both sides were set upon by humans, beasts, and some things in between.

My heart still aches as I recall the final moments before we scattered. A bolt of magic hit one of my warriors in the torso, and I turned to help him. He looked terrified as he began to grow pale. I tried to help him, but it was no use: he went limp in my arms after a few moments. By the time I turned back toward the skirmish, all was lost. The last of the defenders had begun to fall.

I fled into the deeper tunnels as fast as I could, leaving the rest behind me as the darkness surrounded me. The guilt for my actions pains me far more than any of the wounds I've sustained, a pain which I know I will feel for however longer I shall remain.

As of writing this note, I have been lost for longer than I can comprehend, nor care to. The whispers have grown stronger as the days have passed, and I am beginning to fear that their vile words are beginning to influence me. My mind aches from the horrid things I've seen, and I know there is little hope for me. I tried to find any survivors, anyone who made it through, but have been completely alone since the ambush.

Arianwyn, my child, forgive me. I pray to Seren that you're ready for whatever may come, and my only remaining wish is that you know how sorry I am for not leaving you more prepared for the war to come. I know you're still somewhere with whomever else was left behind. I know that one day, our people will look to you for guidance and safety. You're stronger than you'll ever know, and if there's anyone who can find a way to save us all, it's you.

The voices grow stronger, still. Something keeps leading me back into the darkness. Everytime I think I've found a new path, a way out, anything... I somehow end up back at the well. However, these last few times I've gazed into its murky waters, I feel as though it's called to me. It beckons me, tempting me to climb into the waters and see where it leads me. The voices agree with the urge, and the only solace I have from their wicked words are the serenity of the water within.

Every part of me aches as I write, and the voices have nearly reached a macabre crescendo. I know I shouldn't go near the well, but something powerful within me draws me closer still. Perhaps I'll just see how the water feels against my fingertips...