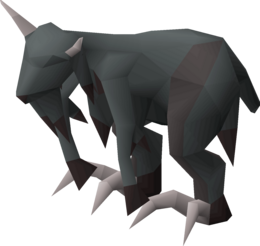 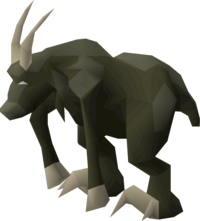 Goraks are typeless melee-using monsters encountered during the Fairytale II - Cure a Queen quest, where they are slain for their claws which are an ingredient for the Magic essence potion. They are found in the Gorak Plane (fairy ring DIR) and in the God Wars Dungeon.

As goraks within the Gorak Plane roll the gem drop table 100% of the time, it is one of the best monsters to kill for the shield left half with a drop rate of around 1 in 250 (while wearing a ring of wealth) while having Legends' Quest completed.[1] The drop rate is further increased if Fairytale II - Cure a Queen has been completed.[2] Because of this, it is suggested to bring a gem bag as they drop uncut gems extremely commonly. 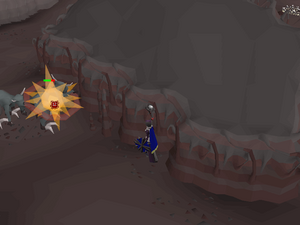 A safespot in the Gorak Plane 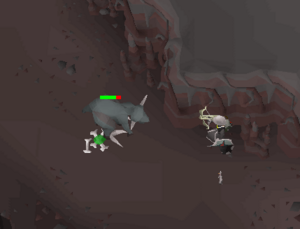 Another safespot in the Gorak Plane

Goraks use typeless melee, which means that Protect from Melee will not prevent or reduce damage. For every successful hit they make, a random stat of the player will be drained by one (except hitpoints). As such, armour with high crush defensive bonuses is recommended.

Several safespots are available in the Gorak Plane, but due to the high aggressive radius of goraks they may be difficult to use. One safespotting tactic is to use the southern walls of the inner ring, as they will get caught on the edges. If one attacks you from the south after respawning, run east/west until it can get caught on a corner, and then run back to the safespot.

Drop rates estimated based on 512 samples from the Drop Rate Project, unless otherwise cited.

The average gorak in the Gorak Plane kill is worth 231.1.

There is a 1/1 chance of rolling the gem drop table.

Drop rates estimated based on 11,780 samples from the Drop Rate Project, unless otherwise cited.