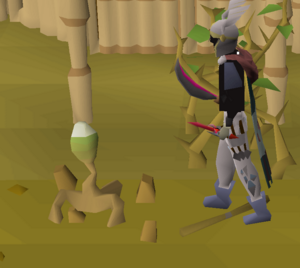 Gout tubers are a rare seed and food obtained from Tai Bwo Wannai Cleanup. A gout tuber is required to complete the medium Karamja Diary. Gout tubers are tradeable on the Grand Exchange, currently priced at 1,004,718 coins, due to the diary requirement and how difficult they are to obtain. 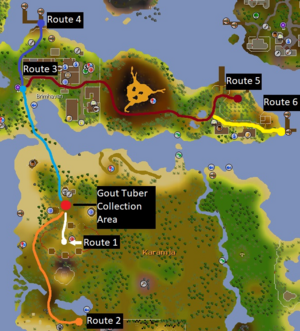 Getting to the collection area.

Gout tubers are collected from the village of Tai Bwo Wannai, on the island of Karamja. Tai Bwo Wannai is an isolated village, resulting in long walk if not using a direct teleport. For the tank method, the Dense jungle directly west of the Tribal Statue will be used. For the snake boxing method, the jungle sections farther west will be used (reference map for location). Methods for getting there are in descending order of speed: 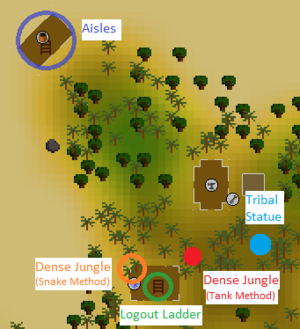 Gout tubers are received as a 1% roll on the jungle event table. The jungle event table is rolled while cutting jungle of all types, each swing at the jungle is a roll on the table. The chance for an event to happen is not dependent on successfully cutting jungle, jungle type, or machete used. Due to events being a result of jungle interaction, and not the success of cutting the jungle, the overall goal is to reduce cut chance as much as possible. This allows less interruption due to jungle depletion and to drop less thatch spar.

The lowest cut chance for jungle will be to use a regular machete and to only cut dense jungle. A lower Woodcutting level is also beneficial, but not required.

The overall average time to receive an event is around 64 ticks with constant jungle interaction and with slight variation between Woodcutting levels. In practice the time will be slower due to interruptions from jungle depletion and events. A player with moderate concentration can expect a tuber on average close to 1 hour 15 minutes. It should be highly noted that this is an overall average, and due to the low frequency of expected rolls some players may have much longer times to receive a tuber.

The shown location for the tank method has two sections of dense jungle close together. This spot is also located directly beside the tribal statue, which acts as an altar. South-west of the dense jungle spot is a ladder leading into a jungle home. Climbing this ladder allows for quick world hopping, and losing aggression from monsters. The shown location for the snake boxing method on the western side of this hut.

North-west located in the same hut as Jiminua's Jungle Store is the banknote exchange merchant Aisles. As the name suggests, Aisles is able to exchange bank notes for the equivalent item for a fee of 5 each. This will be used to un-note food and potions.

For both methods, some standard equipment and methods will be used.

A regular machete is required to be equipped while cutting the jungle. A spade is needed for digging up the gout tuber. Coins are needed for un-noting supplies.

Food, noted and un-noted are needed. The type food and amount will vary depending on defence levels and methods used. Eat food as needed, run to Aisles to un-note food to replenish as needed.

Antidote++, also noted to be un-noted at Aisles, provide 12 minutes of poison protection against tribesman and bush snakes. Their poison damage starts at 11, which will kill any player within 3 minutes if left unchecked.

Due to infrequency of poisonings with either method, a prayer book and holy symbol can be used in place. 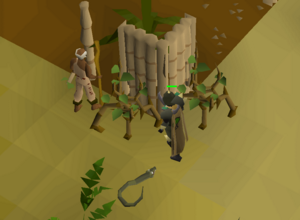 Players that do not have the Defence levels or resources to do the tank method can still easily collect gout tubers using the snake boxing method. This method requires very little resources and Defence levels. The player will be boxing a level 5 snake, so any usable armour that provides some level of melee defence can be used.

Alternatively players can bring equipment reducing magic attack to -64 and runes to cast a combat spell to splash on the snake. This is a more consistent way of attacking the snake without killing it.

Using antidote++ is still required, as the monster events can still inflict poison on the player. Bring a stack of noted antidote++ and coins and use Aisles to un-note them.

A small amount of food is recommended as backup.

In this section it is assumed that the player has very high Defence levels, and large amount of resources for equipment. This level of equipment and levels allows the player to entirely ignore monsters other than broodoo victims. The tribal statue allows the player to recharge prayer and use the rapid heal prayer. If the player has access to a hitpoints cape or a max cape, then the prayer is not needed. Use of high level food reduces the need for resource runs to Aisles. Without the need to recharge prayer, the dense jungle sections on the north-west wall of the logout ladder can be used. These sections are located directly adjacent to each other.

This is the best-in-slot available equipment for gout tuber collection. The set up shown in this section currently costs approximately 961,441,319 coins and a per hour upkeep cost of 158,400.

Replacing the elysian spirit shield and the serpentine helm with equipment one lower in their respective slots reduces the cost to 95,103,878 with an upkeep cost of 0.

Despite the ability to ignore monster attacks, the need to prevent poison remains. Poison is the main concern with this method and level, as even with very high defences a player can be poisoned. A monster does not need to hit the player for damage for poison to be inflicted. It may be advised not to use particularly expensive gear if the player is intending to pay very little attention, in order to lower potential costs associated with a death.

The use of the serpentine helm is a possible alternative, making the player impervious to poison. While the helm is an option, it has a very high cost of 158,400 per hour or equivalently 2,640 per minute. Another consideration is the loss of the set effect of justiciar armour. Using the full set automatically reduces all attacks from non broodoo monsters by 1. This may seem insignificant, however all the monster have max hits in the low single digit range. This effect reduces possible damage by an additional 20-25%.

All equipment recommendations are made based on this order of importance: