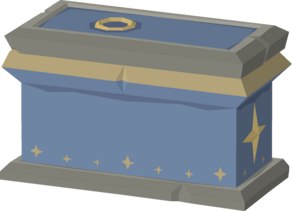 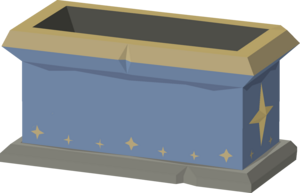 The Grand Hallowed Coffin can be found at the end of the fifth floor in the Hallowed Sepulchre. It requires

92 Agility (not boostable). The player has unlimited time to loot the coffin (if it was reached within the time limit) once they jump over the pedestal, as the timer will pause by then. Occasionally when failing to loot the coffin, the player will be poisoned.

The strange old lockpick has an increased success chance at opening a coffin when compared to the standard lockpick. It will not use any charges to do this[1].

Upon opening the Grand Hallowed Coffin, there is a 1% chance that the Archpriest of the Unicorn will appear. After speaking to him (with or without an amulet of ghostspeak), he will appear in the Hallowed Sepulchre's lobby if players wear a ring of visibility.

Drop rates estimated based on 440,000 loots from the Drop Rate Project, unless otherwise cited.

The Grand Hallowed Coffin rolls the high-tier coffin loot table. It also has a rare chance to give the ring of endurance as a tertiary drop along with its regular drops.[2]