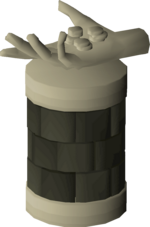 Traders do not need to advertise, meet each other, or even wait at the Grand Exchange for trades to finish, because coins and items from fully and partly finished trades can be collected at any bank or deposit box. Additionally, players will receive a message in their chatbox when the status of a trade offer is updated. This trading system resembles a real-life electronic asset exchange and has since replaced the trading post and the older marketplaces in Varrock and Falador.

Ironmen that use the Grand Exchange are redirected to a unique interface that allows them to purchase bonds while disallowing them from buying or selling any other item. 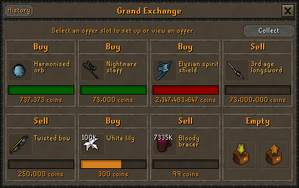 The Grand Exchange is located north-west of Varrock and east of Edgeville, both of which are located just south of the Wilderness. There are many ways to get there, including the following:

Exact details on the internals of the Grand Exchange are not publically known. However, some parts of its operation are vaguely understood through experience.

Players interact with the Grand Exchange by making buy and sell offers for items, at prices of their choosing. Trades succeed when one player's buy offer is greater than or equal to another player's sell offer. The actual price a successful trade occurs at depends on which side made the offer first:

The guide prices are also a basis for Death's Coffer sacrifices and Items Kept on Death mechanics. 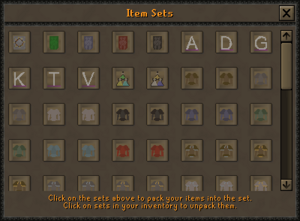 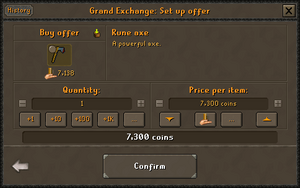 The buying rate is restricted to a certain quantity every 4 hours. Some items have a connected limit, meaning that you can only buy a certain amount of either item, or a mix of the two up to a particular point. For example, if the player has reached the limit on 4-dose Prayer potions, they cannot buy Prayer potions of fewer doses. However, there are no restrictions on selling items.

New Free-to-play accounts have trade restrictions in place until the account's logged in time surpasses 20 hours of game time, 10 or more quest points are acquired, and reaching 100 total level[2]. Such restrictions include a block from selling items on the Grand Exchange. This restriction is in place to help prevent botted and black-market goods from entering the economy, as many of the accounts are caught and banned before they can be logged in for 20 hours in total[3]. 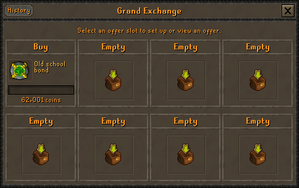 The Grand Exchange is accessible in a limited form to Ironman accounts. Ironmen are allowed to use the Grand Exchange to purchase bonds via a special interface that does not permit them to buy or sell any non-bond item in the game. They are also not allowed to sell bonds.