The granite maul is a two-handed melee weapon that requires 50 Strength and Attack to wield. They are dropped by gargoyles (75 Slayer required), which are in the Slayer Tower.

Players can use an ornate maul handle, obtained from Justine's stuff for the Last Shopper Standing, to enhance the granite maul, reducing its special attack cost from 60% to 50%. This causes it to become untradeable. The handle is effectively consumed by this process, as while the maul can be reverted, the handle will not be retained. When this weapon is lost on death in PvP, the ornate maul handle will convert to 90% of the current Grand Exchange price of the ornate maul handle or 375,000 coins, whichever value is higher.[1]

In addition, players can also use a granite clamp to cosmetically enhance the granite maul, creating a granite maul (or). This also causes the maul to become untradeable and the clamp is not returned upon reverting the maul back to its original state. 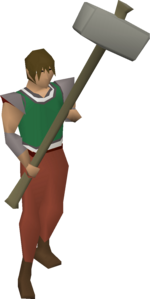 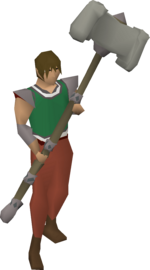 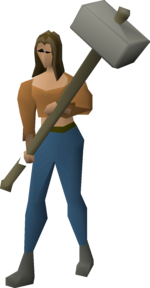 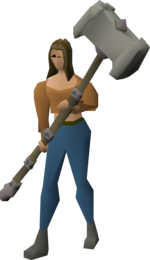 With the handle added, the special attack can result in two or three hits in a very short amount of time, making it a popular choice for player killing. If the three hits are timed correctly, the granite maul can kill instantly. However, one drawback is that unlike most special attacks, Quick Smash does not increase accuracy.

It is commonly used in the Nightmare Zone in conjunction with the Power surge power-up. Because Quick Smash can be performed rapidly under the effect of Power surge, the granite maul is able to put out more total damage than other special attacks for as long as the power-up is active.

Note: Initiating combat with the granite maul's special attack is wasteful as the player character will not deal an instant hit afterwards, with the regular delay occurring instead.