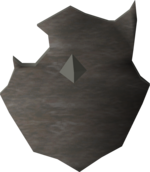 The Granite shield is a shield made of granite. It requires 50 Defence and 50 Strength to equip. It has defensive stats equal to the Toktz-ket-xil, minus the +5 strength bonus, and isn't commonly used for melee combat as a result.

It is more commonly used than the Rune kiteshield due to its superior ranged defence bonus. However, some players choose not to use it due to its weight and slightly lower melee defence bonuses.