Gravedigger is a random event in RuneScape in which the player is teleported to a small enclosed cemetery with five open gravesites, each containing a coffin and marked headstones. The area also contains a Mausoleum, which functions as a Bank deposit box, which can be useful if the player is doing some activity that involves gathering resources, to save a trip to the bank. The player has the option to deposit anything in their inventory they wish to directly into their bank account - however they do not have the ability to retrieve items or get back the ones they deposited. 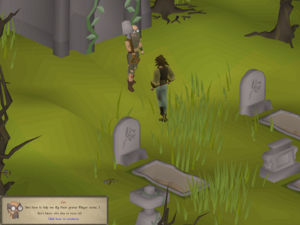 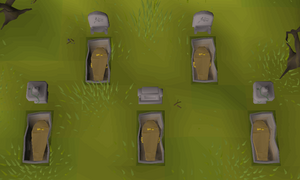 The objective in this event is to match each coffin up with its respective headstones as requested by a gravedigger named Leo. You will need to read each headstone and remember what profession it depicts. By inspecting each coffin, you also get a series of bones and items within the coffin which allows you to see which coffin belongs to which headstone.

After all coffins are placed under the right headstone, talk to Leo to receive a reward and to be teleported back to your previous location. The reward includes 2 parts of the zombie outfit or a zombie emote.

The event can be left before completion by talking with Leo, this however grants no rewards. This does however allow players to use the Mausoleum as a Bank deposit box without too much effort.

You will get two pieces of the zombie outfit (or the Zombie mask) you do not already own, or unlock one of the two zombie emotes.