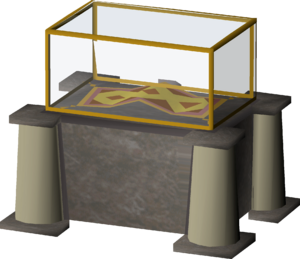 The infamous carpet on display.

The Great Carpet Crash of '76 was an incident that resulted in the death of the Sultan of Al Kharid.[1] The exact date is unknown but is likely to be the late Fourth Age, since the only year ending in 76 in the Fifth Age is 76 itself, which is precluded by the apostrophe.

The crash occurred when the Sultan, looking forward to riding his racing Magic Carpet, accidentally took an unenchanted doormat from the floor of his chamber. After jumping from a high tower of Al Kharid palace, he fell to his death, a loss that shook Al Kharid. The people of the city called upon a ban on magic carpets, and although this was never written down as law, magic carpets fell from use for many years. Only a century and a half into the Fifth Age did they resurface under the direction of the famed merchant Ali Morrisane.

The carpet from the crash can be seen in a glass exhibit upstairs in the Al Kharid Palace.