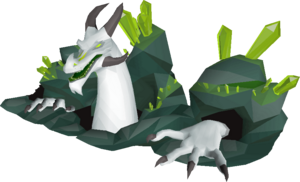 The Great Olm (referred to as the Guardian in the Deep by Xeric's followers) is the final boss in the Chambers of Xeric raid. A large, blind, white salamander, it is one of Xeric's greatest possessions.

Throughout the fight, Olm can also use these moves. If the left hand is clenched or disabled, these attacks will not occur: 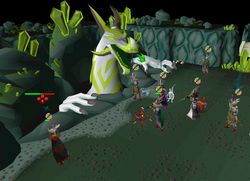 There are also attacks applied during other segments of the fight:

Olm has at least three phases (more depending on the size of the party), with each phase granting Olm extra attacks, indicated by the "power" with which he rises. You can resupply yourself if you die fighting it.

Like other bosses in the chambers, many of Olm's stats scale between its claws and head depending on the stats and amount of players in the raid, despite it having a pre-determined combat level. However, Monster Examine can be cast on him. In most small teams, its defensive and offensive stats and max hit are comparable to God Wars Dungeon bosses. If stat draining attacks — such as dragon warhammer special attack — are used, they only affect the part of him that was hit. His stats also reset when he switches phases.

Note that in order to attack, Olm must find a player in the direction that it is facing due to its blindness. If no targets are in that direction, Olm will move his head to where a player is, and will also skip one attack in its attack pattern. If the player is both experienced and fast enough, they can keep Olm from attacking them. This mostly only applies to solo players as it is hard to coordinate in a group.

To progress, disable both arms. They do not have to be disabled at the same time until the final phase. Under no circumstances should you target the head until the start of the final phase, as it has a healing aura that recovers any damage it takes. On all phases but the final one, if the right hand is up, damaging the left hand will cause it to clench, making it temporarily unattackable.

During the penultimate phase (3rd by default, 1 more for every 8 players on the team) indicated by Olm's head having a green aura, both arms must be permanently disabled quickly. If one arm is disabled and too much time passes before the other arm is disabled, Olm will regain control of that arm, and it will return with full health. The left arm will start using a rejuvenation aura after the teleport attack has been completed (symbolised as the infinite symbol), during which all damage will heal it instead. In this phase, Olm also has access to all special attacks.

Once both arms are disabled, the final phase begins. Olm's head will remain, and it will attempt to kill the team in a final stand. It will use all attacks from the preceding phases, in addition to crystals falling from the ceiling. Olm also has the ability to siphon the team's Hitpoints during this phase. If your team can damage Olm quickly, this attack can be ignored as there will still be crystals falling from above which can deal a lot of damage. Finish Olm off, and claim your rewards once it dies.

Olm's left hand (on the right side when facing Olm) is the hand which should be disabled with Melee. This hand is also the hand that indicates which move is coming next out of crystals, lightning wall and teleport attack. At first, the next attack may seem random, but each phase does the moves in a set order. This may change between each raid but so far these are the expected rotations. 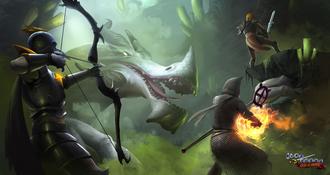 A piece of artwork depicting a group of players fighting the Great Olm.