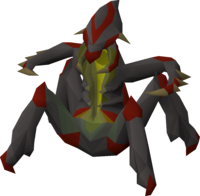 The Greater abyssal demon is a superior variant of the normal abyssal demon. It has a chance of spawning when an abyssal demon is killed if the player has purchased the unlock Bigger and Badder for 150 Slayer reward points from any Slayer master.

Like all demons, the greater abyssal demon is weak against demonbane weapons.

Drop rates estimated based on 1,142,066 kills from the Drop Rate Project, unless otherwise cited.

The average Greater abyssal demon kill while on a Konar task is worth 128,427.67.