Green dragons are fairly easy monsters to kill for profit, even for lower level players. Killing them is also the fastest way of banking Prayer experience on an Ironman account. It is recommended to have at least level 70+ in all Melee skills or Ranged for reasonable kills per hour. Gear setups can vary greatly depending on stats, how much money the player has available and how much one is willing to risk in case of a death. As the green dragons located primarily in the Wilderness, players should only take equipment and items that they do not mind potentially losing.

Melee is one of the best ways to kill green dragons at any levels, and becomes the most effective way in terms of kills per hour and cost when using a dragon hunter lance. Setups can vary depending on the player's equipment, stats and how much the player is willing to risk in case of a death. With dragon hunter lance, high stats and the Wilderness elite diary completed (for noted bones) the player can kill up to 300-330 dragons per hour.

Viggora's chainmace offers the highest damage output, but due to the cost of using revenant ether it is best to use the dragon hunter lance for better profit per hour. Proselyte armour is recommended for its prayer bonus if using damage-boosting prayers such as Piety. Otherwise, the player should wear cheap defensive armour (such as dragonhide or rune armour) for extra defence against the dragons and player killers. Dragonfire shield is strongly recommended for its strength bonus and good defensive stats.

Craw's bow and toxic blowpipe offer slightly higher kills per hour than using a dragon hunter lance, but due to the high cost of using these weapons it is only recommended for Ironmen who wish to bank dragon bones for Prayer experience. Otherwise, melee usually offers higher kills and better profit per hour.

Void Knight equipment is the best option due to its damage-boosting set effect. If wearing full Void Knight equipment however, it is recommended to only use the spot west of Dark Warriors' Fortress between level 12 and 14 Wilderness, as you will not risk untradeable items on death. If wearing black d'hide, it is recommended to use the spot east of black salamanders in level 20-22 Wilderness as there are more green dragon spawns. If not wearing an anti-dragon shield, the player must use Protect from Magic or extended super antifire potions.

The Corporal Beast's cave is marked with the red exclamation point

Getting there is quite simple, as the Games necklace offers a teleport to the Corporeal Beast lair. Clicking on the opening in the wall, the player will enter the Wilderness and only has to run west to reach the dragons, which are located north of the Graveyard of Shadows. Players can also use obelisks, or simply walk. 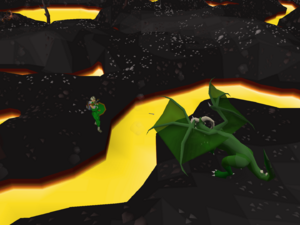 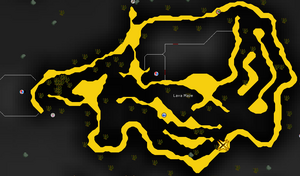 You can also use a canoe to get to the lava maze, then you can safespot them from inside. You will need to take law and air runes to telegrab the drops.