Grim Tales is a master quest that revolves around collecting a couple of rare items for Sylas, a peculiar collector. It contains many references to various real-life fairy tales.

Sylas is the old man with a walking stick in Taverley. He can be found south of the player-owned house portal. Talk to him, and he will ask you to get two rare items in return for his magic beans:

The path to take to see Grimgnash, the griffin. 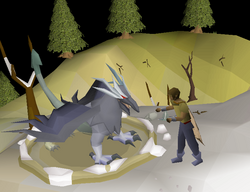 Telling a story to Grimgnash, the griffin.

To reach Grimgnash, proceed to White Wolf Mountain from Taverley, and follow the path that is located the farthest east along the mountain until you reach two white lines. Go through them, and up the path to reach the NPC.

The Griffin will state that it cannot get to sleep because of the howling wolves and will threaten to eat the player if he doesn't tell him a bedtime story. Grimgnash says he loves stories with death, fire and destruction. Tell him a bedtime story by selecting the options which sound the most violent:

Once Grimgnash is asleep, steal a feather from the pile next to his nest and go back to Sylas.

Note: If Grimgnash doesn't like your story, he will hit you for 20% of your current hitpoints, rounded up. While this damage CAN kill you, it is very unlikely to do so as you would need to repeatedly tell the wrong story.

Rupert the Beard can be found in a tower in between Goblin Village and Ice Mountain. The quickest way to get there is by casting Mind Altar Teleport (or using its magic tablet equivalent) and running southward.

If you attempt to get in by the door of the tower, a rather snobby-looking princess will stop you. In order to get in, you will need to go around the back and climb over the crumbling east wall (58 Thieving required).

Next, talk into the drain pipe, and you will find yourself talking to the dwarf imprisoned at the top of the tower.

Talk to him a second time to find out how to get up the tower, and suggest that you should climb up, and then ask if there is anything up there that can help. He will throw down his beard—climb it (59 Agility required). Talk to the dwarf who regrettably cannot give you his helmet as the princess has stolen his armour and locked him in the tower.

He asks you to talk to Princess Miazrqa, who is north of the tower. Use the right-click 'climb-down' option on Rupert, climb back over the east wall, and talk with Princess Miazrqa. She says that she will happily release the dwarf if you get back her pendant, which was stolen by a mouse in her second-cousin's (twice-removed) house which is the Witch's House in Taverley.

Ask Princess Miazrqa for a door key in order to enter the Witch's House, or look under the potted plant just to the left of the front door of the witch's house.

This step is optional. To continue, skip to the next paragraph. Go to the basement of Witch's House, and wear some leather gloves to avoid an electric shock from the gate, which can cause 17 damage. (Gloves can be obtained by repeatedly searching the boxes in the basement near the piano. You may also get other junk like needles and cabbages—keep trying until you get the gloves.) Open the cage door, and search the music stand to find some music sheets for the piano. Read the music sheet—now, you have to play that on the piano. 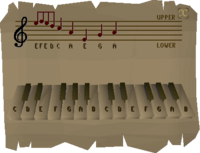 The compartment will open, and the player will find three items in it: a shrinking recipe, to-do list, and two shrunk ogleroots. Read the shrinking recipe, and use your tarromin with 2 vials of water, and add the ogleroot to both unfinished potions. Go upstairs, and drink one of the potions while standing next to the mouse hole in the southern room on the ground floor (no cheese or magnet required). The player will suddenly shrink and will enter in the mouse hole. 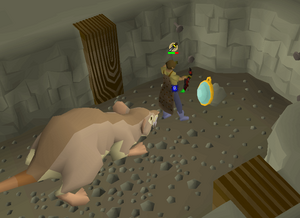 Protect from Melee is helpful in this part because of continuous attacks by level 95 creatures.

Warning: Do NOT go into the north-eastern grate, or you will end up in sprouting back up and have to make another potion to go back into the initial hole again. 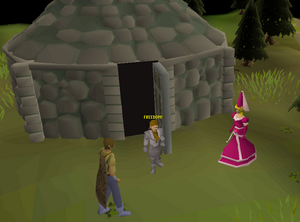 You will need to go through several nail walls to get to the pendant. These nail walls are four nails stuck closely together on the wall. They are indicated as wooden ladders on the mini-map. Climb the nail walls to the north on the eastern wall located south of the grate, and then, continue south-west and climb up two sets of nails. Go north-east, and climb down the nails. Head north and climb up the last set of nails, and take the pendant. Return to the tower, and give the pendant to the Princess. Rupert will be set free, and he will give you his helmet. Head back to Sylas.

Sylas and the beanstalk[edit | edit source]

Items needed: a seed dibber, a watering can (with at least 1 dose), Rupert's helmet and equipment to fight Glod. Also, bank your follower if you have one out, you won't be able to have it in your inventory either.

Take the beans Sylas gives you, and plant them in the special patch south-east of Taverley, near the tree patch. The signpost reads "This earth mound has been magically prepared. Please keep off. Farming strictly prohibited. You have been warned!" A seed dibber and watering can are required, which can be obtained from the tool leprechaun at the nearby tree patch to the north-east, or purchased at a farming store. After watering the patch, a giant beanstalk will grow extremely fast.

Take high healing food and some prayer potions. Make sure to keep your second oogleroot/shrink-me-quick potion either in your bank or inventory for after the fight. When you're ready, put on protect from melee and climb up the beanstalk (requires 59 Agility). You will not be able to have a follower with you, even in your inventory. 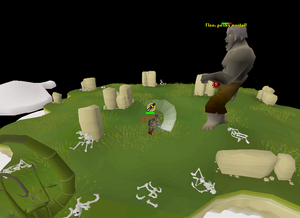 Glod, a cloud giant, will attack you immediately. He is level 118, but will become level 138 shortly after the battle starts. He is difficult to damage with low melee as he hits very hard, so Ranged is a much better option if you have low melee stats, as Ranged is his weakness. Magic works well too. The upgraded Iban's staff's and Iban Blast is very effective, but do prepare plenty of runes and range ammunition. Glod is immune to poison.

BE AWARE: Glod will sometimes quake the ground, draining your Prayer and turning off protection prayers so be wary! He will also sometimes heal himself.

Players with 70+ combat stats should have absolutely no problem defeating him as the battle could be done with minimal damage sustained. However it is advised that you prepare as stated above.

Use Protect from Melee whenever you can. Cast your best spell or range at a distance while hiding behind a wall. He will sometimes taunt you, causing your character to attack him head on. Whenever this happens, run back to the wall, and turn on Protect from Melee whenever you're within his hitting range. Remember to keep your health high as Glod's melee attack is very accurate and can hit as high as 24.

After the battle[edit | edit source]

Items needed: the other shrinking potion, any axe, boost for Woodcutting if below level 71.

Once you defeat Glod, he'll drop the golden goblin. Take it back to Sylas. He will ask you to chop the beanstalk down (71 Woodcutting required). Use a shrinking potion on the beanstalk first; then, take an axe and chop away. Go back to Sylas for your reward.

Chopping the beanstalk down. 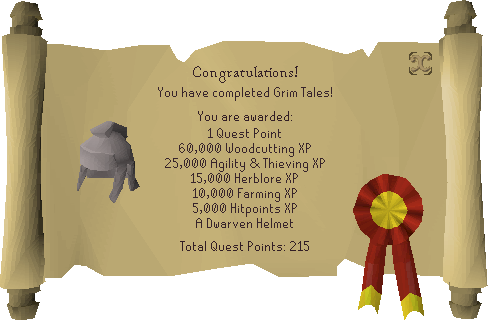 Completion of Grim Tales is required for the following: