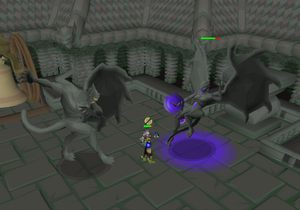 A player fights the Grotesque Guardians.

The Grotesque Guardians are a pair of gargoyles, Dusk and Dawn, found on the Slayer Tower's rooftop, whose entrance is found on the 2nd floor[UK]3rd floor[US]. In order to access the roof, players must obtain a brittle key from gargoyles while assigned them for a Slayer task (requiring 75 Slayer).

Similar to other Slayer bosses, such as Cerberus and the Abyssal Sire, the Grotesque Guardians can only be killed while the player is assigned gargoyles or the Guardians themselves as a slayer task.

Despite Dusk and Dawn being two different entities, killing both guardians only counts as one kill due to the Dusk absorbing Dawn's essence. However, if the player has the Double Trouble perk unlocked, Dawn's death will also be included, although Dusk still needs to be killed and the full boss fight completed in order to receive experience and task progression.

The Grotesque Guardians, as well as the gargoyles, were created by the Bandosian general Snaarldor during the God Wars. Creating an incantation circle with stakes made of Bandos's metal (the same metal used in Bandos armour), along with a large hunk of tourmaline, Snaarldor performed the ritual at high noon, instructing his soldiers to strike the bell once the tourmaline core began to sink into the floor.

When the bell was struck, a surge of black energy pulsed from the bell, causing the statues on the rooftop, as well as the lower floors, to come to life. Snaarldor proceeded to command the Grotesque Guardians to fight against the forces of Armadyl, Saradomin and Zamorak. However, with the tower's magic being of Zamorakian origin, they immediately attacked Snaarldor instead, who eventually fell from the rooftop.

Exchanging strikes mid-air, Snaarldor managed to break one of Dusk's wings, but fell to the ground, while the Guardians returned to the top of the tower. After getting up from the fall, Snaarldor called for his soldiers to retreat.

Today, the Grotesque Guardians remain on the rooftop, in which its entrance is locked and must be opened with a brittle key.

Like gargoyles, players must bring a rock hammer, rock thrownhammer, or granite hammer to finish them off.

To initiate the fight, players must ring the Cloister Bell in the north side of the roof. This will trigger a cutscene in which the Guardians will awaken, and the fight will begin. If players have killed the Guardians more than five times, the Cloister Bell will have a "Quick-start" option, which will skip the cutscene and start the fight directly. Attempting to ring the bell again before the fight is over will yield the message Concentrate on your fight! in the chatbox.

During this phase of the fight, Dusk's wings may glow, and will perform an explosive attack. If players do not run away from him when he does so, the player will be dealt 30+ damage and be knocked back. In addition, debris may fall around the roof, which can deal up to 22 damage and stun players for a brief period of time. Once his health has reached half, Dawn will return and perform a lightning special attack with Dusk that has an AoE of 3x3, rapidly dealing up to 5-10 damage per tick.

After the lightning attacks, Dawn will send out two or three energy spheres that will grow larger over time. Players must absorb these spheres in time, as each sphere will heal Dawn for 90 Hitpoints.

After killing Dawn, Dusk will absorb her essence, and initiate the final phase of the fight. Here, he is stronger, can use melee and ranged attacks, and may drag players to a prison of purple flames. Players must escape the prison (by clicking anywhere outside it), or they will be dealt 60+ damage, which heals Dusk.

In addition to the 100% drop of granite dust, the player will also have two rolls on the Grotesque Guardians' drop table, including unique items but not tertiary items. The drop rates in the drop table below reflect the chance of getting an item for every roll on the standard loot table, which means the effective drop rate is approximately double the listed numbers per kill. Unlike the Kalphite Queen, you are not guaranteed to get a food or potion drop each kill.

Drop rates estimated based on 35,446 kills from the Drop Rate Project, unless otherwise cited.

The average Grotesque Guardians kill is worth 54,172.4.

The average Grotesque Guardians kill while on a Konar task is worth 56,468.11.