Group Ironman Mode is an Ironman Mode variant which was released on 6 October 2021, following the result of a successful poll.

The mode allows 2 to 5 players to group up together with all normal Ironman Mode (or Hardcore Ironman Mode) restrictions. Only newly created accounts can enable Group Ironman Mode. Existing accounts cannot join a group.

Players that join a group before it is founded have Prestige status, which allows them to be free of trading restrictions.

Group ironman players may freely trade within the group. New members (ie. do not have Prestige status) that join an existing group will be subject to trade limit caps that increases weekly. This cap applies to all items and gold received from other members and from shared storage as follows:

Group ironman players have access to their group's shared storage, available via the regular Bank interface. All players in the group can deposit into the shared storage, but only one player can access it at a time.

Initially, there are 80 bank spaces but completing tasks by anyone in a team permanently increases that team's group storage by a number of slots up to a maximum of 200 group storage bank spaces. In Group Storage, these tasks can be found by selecting the "Storage Unlocks" icon. They can also be found in the Iron Group settings.

Hardcore group ironmen will lose lives after an unsafe death, similar to solo hardcore ironman mode. The group has a shared pool of 1 life per player; for example, a group of 3 players shares 3 lives between them and will lose Hardcore status after losing the third life. Lives can be lost by any player, and multiple lives can be lost by a single player. Unlike solo hardcore ironman mode, all PvM-related deaths are unsafe and will result in a loss of a life. This includes deaths inside minigames such as Chambers of Xeric and Fight Caves. Hardcore group ironman players should take extra care in minigames such as Pest Control as other players can provoke monsters such as splatters and cause them to detonate close to you. Make sure to leave the Nightmare Zone via the exit potion instead of dying. 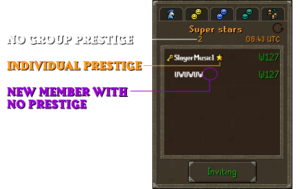 Example of Group Ironman Prestige star on the right side of player's name in the clan's chat interface.

Group Prestige is a cosmetic indicator that is reserved for groups consisting of original members or have not engaged in certain PvM activities with other players outside your group. This indicator will be a gold star icon displayed next to the group list in-game and on the hiscores. Group prestige has no impact on gameplay. Group leaders have the option to opt-out of this option upon the creation of the group.

A group member without individual prestige is unable to use most unique items from raids, regular bosses, and slayer bosses without having killed those bosses at least once.[2] In addition, there are several non-boss items that are locked behind killing the monster that drops them at least once. These items include but are not limited to:[3]

To become an ironman, players must speak with the Ironman tutor on Tutorial Island before completing the tutorial. After selecting a group ironman mode at the tutor, players must then visit The Node south of the island to form or join a group. Group leaders have the option to create a group, set a group name, and invite players. Up to 4 additional players can be invited in the group. Group leaders can choose to opt out of group prestige.

The group member that creates the group by default will be the group leader. Leaders can only invite fresh accounts to the group. This is to prevent unfair advantages to groups by inviting experienced players to the group. Groups will be automatically disbanded if there are no more members in the group and the leader leaves.

To join a group, players must travel to The Node. Only newly created accounts can join a group. Players can apply to be a group leader by talking to Tony, the Group ironman tutor, then they can apply other players to their group by using the right-click option Apply on them.

Group ironman players can leave the group one of two ways. Players can choose to leave or be kicked by the leader. Players leaving the group voluntarily will have a 7 day grace period in which they can change their mind. This grace period serves two purposes: allowing players to change their mind, and provide a safety net for misclicks and account hijacking. Members that are kicked from the group will have a 7 day grace period to settle their affairs with the group. During both grace periods, the player can still trade normally with other members of the group. Also during this grace period, you will not be able to join any other groups. Groups will be automatically disbanded if there are no more members in the group and the leader leaves.

Upon leaving the group, the player will have two options: retain their group ironman mode status or become a regular account. This decision is very important as it decides whether or not tradeable items are deleted from the account. It is important to note that all stats, untradeable items, quest progression are retained for either decision.

Keeping group ironman status will result in the creation of a new group with the player as the leader and all tradeable and members only items are deleted.

Be advised that if a player leaves a group after they leave the Node, they cannot join another group that has already left the Node. Once you leave your group, you are only able to create new groups.

Converting to a regular account will retain all the progress and items on the account. The player will be removed from the group and group ironman hiscores.

The leader of a group can choose to step down from their position at any time by talking to the Group Iron Tutor on the Node. There is a seven day grace period before their decision takes effect. This is to prevent hijackers taking over accounts and maliciously making players step down as leader of their groups.

When a leader steps down, another player must take their place. The abdicator chooses the new leader, and they will not be able to step down until a successor has been chosen.

If there's no one else in the group, the leader can't step down. Instead, the group will be disbanded only when they themselves leave.

Additionally, current Ironman accounts can change to an Unranked Group Ironman and join a group that way. This is only one way, once an Ironman changes it cannot be reverted.

Should players wish to join a new group or invite a new player to their group, players can convert their existing Group Ironman status to unranked, removing their group from the HiScores.

A group that invites an experienced player will:

If players leave an existing group, they may also choose to adopt Unranked status: