From Old School RuneScape Wiki
Jump to: navigation, search
The RuneScape Wiki also has an article on: rsw:Group of Advanced Gardeners 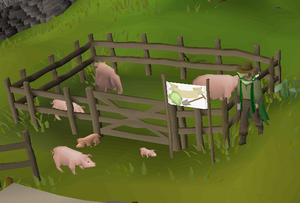 The pigpen owned by the G.A.G. - The logo is to the right of the entrance

Group of Advanced Gardeners, or G.A.G., is an organisation of gardeners, members of which can be found throughout Gielinor and help players care for their farming patches in exchange for payment, which often takes the form of items related to the Farming skill such as compost or crops. In addition, these gardeners also sell gardening equipment, such as rakes and other useful farming tools. The group's leader, Martin the Master Gardener, sells the Farming Cape of Accomplishment.

G.A.G. owns a pigpen with their logo on it near the Draynor Village market.

G.A.G. plays a role in the Fairy Tale quest series, especially in A Fairy Tale Part I quest.