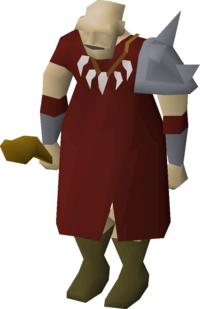 Grunsh is an ogre shaman that plays a significant role in the Forgettable Tale of a Drunken Dwarf. During the quest, the player attempts to understand the ravings of a drunken dwarf, who the Dwarven Black Guard believes may have information related to the recently departed Red Axe.

Several years ago, a group of dwarves in the employment of The Red Axe were conducting an unknown operation on the frozen peak of Trollweiss Mountain, the colossal mountain beneath which the dwarves' capital city, Keldagrim, is hidden. The dwarves were led by Colonel Grimsson, the violent right-hand man of the company's director, Hreidmar.

Whilst wandering the icy land, the dwarves found Grunsh in the snow, at first believing him to be a native troll. Unconscious, freezing, and on the brink of death, the dwarves soon realised that he was an ogre.

Once awake and partially healed, Grunsh could remember nothing. How he came to be so far from the ogre homeland in the Feldip Hills remains a mystery to this day. Grunsh soon proved to be intelligent by ogre standards, capable of casting magic. As dwarves do not use magic, Hreidmar soon saw the value in having a mage on his side and recruited Grunsh as employee #38262.

The Forgettable Tale of a Drunken Dwarf[edit | edit source]

The player infiltrates a hidden Red Axe facility after some time, only to realise that the dwarf's memory was altered by Grunsh. The dwarf, while exploring the mines in which the Red Axe was hidden, discovered that The Red Axe was working with the gnomes of Arposandra in an effort to gain control of Keldagrim. He was captured by the Red Axe and brainwashed by Grunsh, leaving him with little memory of the incident and craving for beer and kebabs. In his now alcoholic state he would not be believed.

The player suffers a similar fate; while observing a procession of artificially manufactured chaos dwarves, they are caught and brainwashed, leaving them with no memory of their discoveries in the base. They then go on a drunken rave in the Laughing Miner Pub, effectively rendering any remaining memories unbelievable.

Only Commander Veldaban, the commander of the Black Guard regiment in Keldagrim, suspects that their memories may have been altered magically.