Gu'Tanoth is an ogre city far south of Ardougne and slightly south-west of Yanille. Players need to progress far enough into the Watchtower quest in order to enter.

Some ogres here are aggressive to players.

This cave contains many high level monsters. In the centre of the cave is the Rock of Dalgroth, which players must mine during the Watchtower quest. The ogre shamans in there are invincible and can only be killed during the quest.

The Skavids are a cave-dwelling race and slaves of ogres. To enter their caves, players must have a Skavid map, which is obtained during the Watchtower quest, and a light source.

An island can be found to the east of the city. The only way to get onto the island is by taking a specific cave entrance (the broken bridge leading to a small island is not passable). The relevant cave can be found by starting at the south-west corner of Gu'Tanoth, then walking further south. It lies between four rocks to the west and some ruins to the south-east. Note that you do not need a skavid map to enter this cave. On the island is Gorad, which players must talk to during the Watchtower quest. 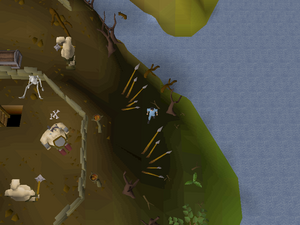 The island is also a location for a coordinate clue for clue scrolls. Dig on the east side of the island, near a spear wall.