Guardians are statues which appear in groups of two as a combat encounter in the Chambers of Xeric. These statues must be destroyed in order to pass the room and can only be harmed with pickaxes; all other sources of damage will not count. The dragon warhammer's special attack applies before the attack's damage roll is reduced to zero.[2] Damage done to the guardians is multiplied by a factor as shown in fig.1.[3] The formula is capped to ensure the Crystal pickaxe deals the same damage as the Dragon pickaxe, despite having a higher mining level requirement.[4] Attempting to enter the passage they are guarding will result in the guardian knocking the player back for moderate damage. 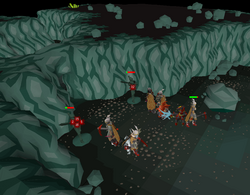 The guardians attack with Melee and can occasionally stomp the ground, dealing moderate to heavy damage in a 3x3 area. Due to the guardians' stomping attack, it is highly recommended to flinch them to reduce the amount of damage taken. This can be done by attacking the guardian and immediately running two spaces away from it. The health bar does not need to disappear before they can be attacked again, since the stomp attack is easily avoided and their standard melee attack is not particularly damaging.

The strengths and hit points of the guardian is dependent on the party size. The Hp formula is shown in fig.2.

Where D is the damage multiplier, H is the guardian's hitpoints, P is the pickaxe's level requirement, M is mining level, M is the average mining level and T is team size.