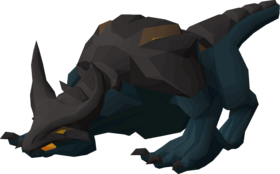 The Guardian Drake is a superior variant of the drake. It has a chance of spawning after purchasing the unlock Bigger and Badder for 150 Slayer reward points from any Slayer master.

Guardian Drakes have two special attacks. They share the same special attack as regular drakes, launching volcanic breath at the player that hits four times in quick succession for up to 8 damage each. Players can dodge this attack by moving one tile away before the volcanic breath lands.

Drop rates estimated based on 212,000 kills from the Drop Rate Project, unless otherwise cited.

There is a 5/85 chance of rolling the herb drop table. The drop table is rolled up to three times, giving various herbs. There is an equal chance of dropping 1, 2 or 3 herbs.

There is a 6/85 chance to get noted herbs. Only one herb type is dropped, but it has an equal chance of dropping 1, 2 or 3 herbs of the same type, for an average of 2 herbs.

There is a 1/85 chance of rolling the rare seed drop table.

There is a 1/85 chance of rolling the gem drop table.