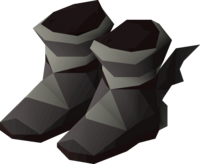 Guardian boots are a pair of upgraded Bandos boots which require level 75 Defence to wear. They are the predominantly defensive counterpart to primordial boots, providing the best melee and ranged defence bonuses of any footwear.

They can be created by using a black tourmaline core with a pair of Bandos boots. When a player does this, a message in the chatbox will state The second you hold your tourmaline core by the Bandos boots, the core is absorbed rapidly. Perhaps there is some link between the metal in Bandos and tourmaline...

Like the Bandos boots used in their creation, they will render followers of Bandos unaggressive to the wearer in the God Wars Dungeon.

The high ranged defence bonus of Guardian boots makes them even more desirable than regular Bandos boots for players trying to maximise their defensive bonuses. Furthermore, they are effective when combined with the rest of the Bandos armour when trying to achieve an extremely high ranged defence bonus. Guardian boots do not penalise ranged and magic attack bonuses as much as the original Bandos boots.

It should be noted that Guardian boots are, along with their predecessor Bandos boots, several times heavier than any other pair of boots in the game, with a weight of 7 kg. This makes them impractical for travel and dangerous skilling activities with lots of running such as Pyramid Plunder or ZMI.