Guardians of the Rift

Guardians of the Rift is a non-combat minigame that takes place within the Temple of the Eye. The main goal of the game is to assist The Great Guardian in closing an abyssal rift to The Scar, the most dangerous part of Abyssal Space, by supplying it with guardian stones while protecting it from the abyssal creatures that come through the rift.

To play the game, players must have completed the Temple of the Eye quest and have at least level 27 Runecraft (which is automatically obtained from the prerequisite quests).

The portal to the Guardians of the Rift minigame resides in the basement of the Wizards' Tower. Players can get there by:

The objective of the minigame is to allow the Great Guardian to charge up enough power to close the rift where Abyssal creatures are coming through. 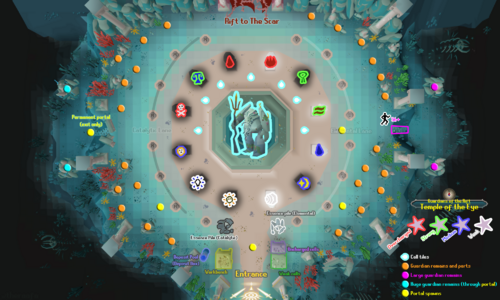 An overview of the Temple of the Eye, where the minigame takes place.

Players will need to do the following throughout the battle:

To imbue essence and create rift guardians, players must obtain guardian fragments, mined from guardian remains of varying sizes in the Temple. There are three nodes that can be mined off of - guardian parts, guardian remains, and large guardian remains. Parts and normal remains can be found in the edges of the temple area, while the larger remains are past some rubble in the mid-east of the Temple area, requiring level 56 Agility (not boostable) to access.

The huge guardian remains, which give guardian essence when mined, are found at the mid-western area of the temple. Though normally inaccessible, portals will occasionally appear that takes players there, though these spawn randomly and remain active for around 25 seconds.

The doubling effect of certain mining enhancers (ex. Varrock armour and charged celestial rings) will apply when mining for guardian fragments and essence.

The UI showing the time remaining for the active earth and blood Portal Guardians and the portal to the huge guardian remains, among other things. 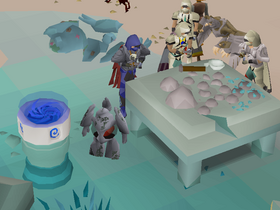 Creating guardian essence on the workbench. Crafted runes can be deposited into a bank via the Deposit Pool next to it.

Guardian fragments are converted into guardian essence, which are storable in essence pouches. They are brought to runic altars to be imbued via entering Portal Guardians surrounding the centre of the Temple. Only two portals are active: the elemental and catalytic portals. Imbuing guardian essence requires the same Runecraft level as crafting them regularly in the corresponding altar. Note that crafting on runic altars during the minigame will not give players the rift guardian pet.[1]

Occasionally, players will receive a portal talisman that can be used on the Portal Guardians to take them back to the runic altar they previously used, even if the portal is closed for that altar. These cannot be kept after the game ends, so players should use them whenever possible. Players can right-click "Toggle-talisman" on a Portal Guardian to stop receiving portal talismans of the selected type.

Be aware that players need to have completed certain quests to be able to enter some Portal Guardians: 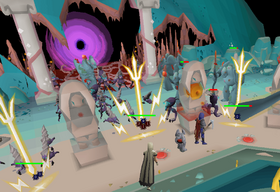 Rift guardians are created with a chisel via the essence piles near the tables at the south, and can either be elemental (east) or catalytic (west). These will follow the elemental/catalytic guides in the outer ring. Only ten rift guardians can be active at any time.

Barriers are created by using charged cells on the cell tiles at the front-centre. Using increasingly higher tiers of cells in order (ex. medium to strong cells) will also strengthen them. Using lesser charged cells (ex. a strong cell on an overcharged barrier) will instead reinforce the barriers by "healing" them. Should a barrier break, the cell tile will need to be repaired, which requires ten guardian essence.

The strength of the cell corresponds to the Runecraft level of the runic altar it is charged in:

Since each combination rune can be made on either of two altars, the cell tier is determined by the elemental altar that's used.

Players can gain energy by either using cells, by using guardian stones on the Great Guardian, or by repairing a barrier. For each stone used players will get two energy in elemental or catalytic depending on the type of essence used; if crafting combination runes, players will get a polyelemental guardian stone instead, which gives three elemental energy. If players use ten essence on repairing a cell tile they will gain 25 energy in both types.

Each cell can be used in one of four ways. Build a barrier, Recharge a barrier, strengthen a barrier (one tier at a time) or create a guardian. Higher level cells give more energy, except for building barriers which always gives 2 energy in both types. Using cells on barriers gives equal energy in elemental and catalytic, where as creating a guardian gives energy only in the energy type matching the guardian they created. Creating a guardian awards

is the energy that would be awarded for strengthening a barrier with the same cell.

Phases of the battle[edit | edit source] 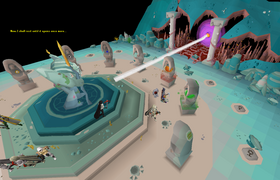 Charged with enough power, the Great Guardian closes the rift.

New players cannot join in after the initial 120 second timer ends. After this enemies will begin spawning and altar portals will open.

The battle is split into three phases:

The first phase is short, giving players two minutes to prepare by obtaining guardian essence and uncharged cells to create and power up guardians. Initially, there are some weak cells used in the beginning stages of the battle that should be used to erect barriers.

After the two minutes pass, abyssal creatures will begin spawning from the rift, consisting of mostly abyssal leeches and guardians. There will be a few walkers among them. The monsters will attempt to attack the Great Guardian, with their attacks draining its energy. They will also attack barriers and rift guardians, although they only retaliate back for the latter, not actively targeting them. Should the Great Guardian's energy level reach 0%, the encounter will fail.

When the guardian reaches 60% charge, the temple will rumble as the rift glows more intensely, damaging all active barriers by 50 health and spewing out more guardians and walkers compared to leeches. Players should heal the barriers and create more rift guardians if necessary.

When the guardian reaches 100% charge, it will seal the rift. All abyssal creatures and rift guardians will automatically die once this occurs and there's a brief period of respite for players inside to leave or reposition themselves.

At the beginning of a new game, all guardian fragments, essence, and portal talismans acquired during the game will be removed from the player's inventory - this also applies when leaving the minigame area.

At the end of a game, players will receive elemental and catalytic points, in which one is given for every 100 energy gained during the game, with a chance of rounding up (ex. 73 elemental energy will give a 73% chance of gaining one elemental point). One of each are used to search the Rewards Guardian, located just outside the rift gate, where players can receive their rewards from. A maximum of 1,200 total energy can be earned per game, with a cap of 1,000 per energy type. 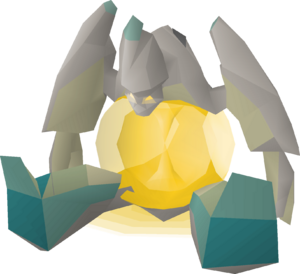 Rewards from the Guardian include a standard loot table including runes and talismans, as well as various unique rewards.

Apprentice Felix, the proprietor of the Temple Supplies shop.

Items from the rewards shop are purchased with Abyssal pearls, which are obtained from the Rewards Guardian.

Icons for runes used in the minigame UI. Notably, astral, soul, and wrath icons exist despite never seeing use. 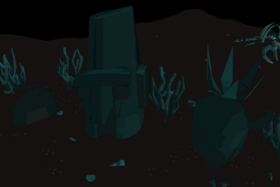 The pineapple, moai and rock in the style of SpongeBob SquarePants.