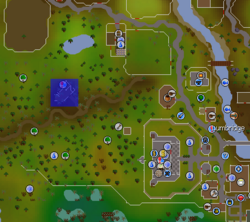 The H.A.M. Hideout is the base of operations for the Humans Against Monsters organisation. It is located west of the Lumbridge general store. To enter it, the player will need to pick the lock on the trapdoor to get in. This can be done with the player's hand, but a lockpick will increase the players chance of success. The fastest way there is using an Amulet of Glory to teleport to Draynor Village and running east. Players who have progressed at least halfway through Death to the Dorgeshuun can access the secret dungeon inside the hideout. The secret entrance is located just south of the podium.

All the following quests are involved with the HAM dungeon: