During the Underground Pass quest, the player receives a pair of gloves from a dwarf named Klank, appropriately called klank's gauntlets. Without the protection from the gauntlets, the half-soulless will bite players who search their cages, inflicting damage. Players search the cages as they must retrieve the dove skeleton in order to defeat Iban. Finding it might take a while, as there are many cages. 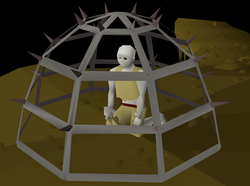 A half-soulless, trapped in a dome cage.