The Hallowed Sepulchre is an Agility activity set in an ancient Saradominist burial ground of the city Hallowvale located beneath Darkmeyer available to players with level 52 Agility. There are five floors available scaling with the player's Agility level. In order to receive hallowed marks, the coffins must be looted, with deeper floors providing more marks per looted coffin. Noticeboards are located next to the stairs on either side of the lobby, where players can check their personal statistics within the Sepulchre, as well as the global statistics.

During the Second Age and early Third Age, the land of Morytania was a Saradominist kingdom known as Hallowvale. The Hallowed Sepulchre served as the final resting place for many Hallowvale residents. Members of Saradominist religious orders were frequently buried there. Accordingly, looting coffins will sometimes yield a Holy symbol or Monk's robes.

As the God Wars progressed, the conquest of Hallowvale (and thus the sacking of the Sepulchre) became increasingly likely. A Justiciar of Saradomin eventually instructed the Archpriest of the Unicorn to begin securing the Sepulchre. The Archpriest and his followers got to work filling the Sepulchre with dangerous traps. They became more skilled at making the traps deadlier as construction moved down the floors. Down at the final level, the Archpriest sealed himself and his followers within their tombs, ensuring the secret of how to disarm the traps died with them. Despite the loss of Hallowvale to the Vampyres, the traps were very successful in their purpose: as of the Fifth Age, no Vampyres have been able to access the Sepulchre. 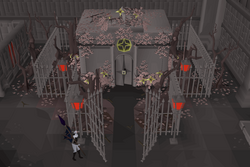 The entrance to the Hallowed Sepulchre.

Looting the coffins is optional, but is the only way to obtain rewards like hallowed marks. The following minimum levels are required, depending on the obstacle blocking the coffin:

Progressing through the Hallowed Sepulchre requires running through each floor in a limited amount of time. The first floor begins with 2 minutes on the timer, and an additional 2 minutes is added to the timer when climbing down to each lower level. After the timer runs out, the player will still be able to complete the current floor to gain Agility experience, but will not be able to loot coffins or progress to the next floor. Hallowed tokens can be used to extend the timer. Time saved on a floor gets carried over to the next one.

The timer is paused after passing the final obstacle on each floor. This area contains magical obelisks, which will restore the player's run energy if a Saradomin item is equipped and can be used to exit the sepulchre.

Experience for completing a floor will only be granted upon descending the stairs at the end of the floor, or by exiting the floor via one of the magical obelisks.

The obstacles in the Hallowed Sepulchre appear in cyclic patterns that block the player, but can be avoided with careful movement and timing. In most cases, running into an obstacle will teleport the player to a location just before the obstacle on the path, costing the player time. This deals a small amount of damage unless the hallowed ring is equipped. The following dangerous obstacles appear along the route:

All traps can be completely avoided if movement is properly timed. However, this requires significant practice and players should consider bringing food until purchasing the hallowed ring. 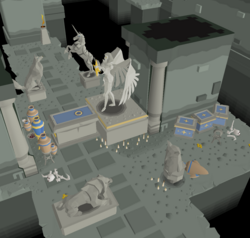 Coffins are found on each floor of the Hallowed Sepulchre. Looting coffins provides hallowed marks and other random rewards including some unique items. At the end of the final floor there is an additional Grand Hallowed Coffin that can be looted if the player reaches the end before the timer ends. Coffins can no longer be looted after the timer ends, along with the other activities required to reach them.

Failing to loot a coffin will poison the player. With low hitpoints it is recommended to bring antipoison or the prayer book.

Each coffin is obstructed by a skill challenge that must be unblocked before looting. Each type of challenge has different item and skill requirements.

This setup is recommended when attempting the sepulchre for the first time and none of the items are unlocked. Once the player has acquired enough hallowed marks, it is recommended to first purchase and equip the hallowed ring, followed by the other rewards in any order: hallowed grapple, hallowed focus, hallowed symbol, and hallowed hammer.

Please note that experience rates will be higher if you ignore opportunities to loot coffins.

While looting coffins the player will be rewarded with Hallowed marks. These can be used in the reward shop in order to purchase the following unique items:

The equipable Hallowed items acquired from the shop count as Saradomin items for the purpose of regaining run energy from the Magical Obelisks at the end of each floor, as well as for protection purposes in God Wars Dungeon.

Buying all items from the reward shop, including six dark dyes to recolour a full graceful set, costs

5,450. This does not include the three consumable items: Hallowed tokens, Hallowed crystal shards, and Hallowed sacks.

Upon returning to the Hallowed Sepulchre lobby via a magical obelisk, the player has a chance to receive the Agility pet, the giant squirrel. The chance of obtaining the pet depends on the difficulty of the floor completed and is as follows:[2]

There are a number of NPCs scattered throughout the Sepulchre. Some are meant to look like players either standing around or looting coffins. Some NPCs can be talked with and they will mention how the rogue outfit does not help when looting coffins or that the lockpick does help.

There are also 5 Knight spirits that can be encountered while looting coffins, after which they will appear in the lobby if the player is wearing a ring of visibility, and can be talked to while wearing a Ghostspeak amulet or equivalent. The possible encounters are the Knights of the unicorn, wolf, lion, and owl, as well as the archpriest of the unicorn. 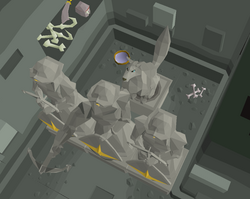 The wolf statue, seen with a bowl of water and bones.