This page covers the basic strategy for running the Hallowed Sepulchre efficiently and consistently, through the third floor. Included are overviews of each of the routes. Please note given the emphasis on timing in the Sepulchre, achieving the best rates will require extensive practice.

Each variety of trap has a different behaviour and appearance depending on its tier, determined by the floor it appears on.

There is now a tick between cycles where none fire, synchronized with the end of the audio effect. If you start moving on the same tick, you can cross entire sections in one sprint that would otherwise take two or more stages.

Prioritize side-stepping over making progress down a lane. Try to stay in the middle lane, as moving to either side lane is easier than moving through the middle lane. Note that the statues have a small animation right before they shoot, which can help to anticipate standing in the correct lane.

When running, every other tile after the origin tile does not teleport the player. This means that it is possible to skip single-width rows of teleport tiles by stopping one tile before crossing the row. Similarly, blocks where blue tiles alternate with yellow tiles can be crossed while only risking stepping on blue tiles. After being teleported by a blue or yellow tile, there's a small window of time where you cannot get hit by the arrows or swords. If timed correctly, the blue portals can be used to "hop over" arrows or swords to avoid getting hit.

Sword obstacles have various ways to be solved, but usually just before the sword is caught by the statue or just after it is thrown is the ideal time to start crossing. Some corridors have safe alcoves.

The player should favour dodging arrows before moving forwards. Moving diagonally allows the player to move to a safe lane without losing time.

Before leaving the corridor, check if a lane between the player's position and the exit has an arrow or will soon have one. If there is any chance of being struck while exiting the corridor, wait several tiles in front of the statues, move to a safe lane and only then leave.

Sets of flame statues activate with 1, 2 or 3 different stages (each stage has different safe areas between active flames). The player should memorise or somehow mark the safe areas in order to cross them effectively.

Sets of flame statues can be crossed with a minimum number of movements from one safe area to another, based on the distance that can be run while the flames are inactive. As the player approaches the statues, they should try to reach the farthest safe area they can, as this may result in having to spend one fewer stage waiting.

The glow on the floor shows the actual position of the flame. Keep this in mind when observing flames from an oblique angle.

When running, the player only risks being affected by lightning tiles on every other tile. Because all sets of lightning tiles are checkered, they can all be safely crossed by standing one tile behind a lightning tile before moving forwards. See Run trick for more details.

Same strategies as used for sword obstacles and arrow obstacles, but there is very little room for delays. It is important to master diagonal dodging of arrows without stopping.

Use the blue tiles to move ahead faster or to jump across the sword as it returns.

Same strategies as used for sword obstacles and flame obstacles, but more precise timing is required.

The player has to juggle dodging the arrows and moving to safe areas at the same time. Once the player becomes comfortable with the timing, it is possible to cross greater spans of flame statues before having to move to a safe lane.

Whenever there is a risk being teleported by a blue tile, the player should keep an eye on the next set of arrow so they can quickly dodge them if they do get teleported.

If you click at the same time as you get teleported, try to stop moving as soon as possible.

If you have to dodge arrows while standing in the middle of a lightning tile obstacles, it is imperative to move diagonally and not sideways.

While the direction the player enters each floor from appears to be random, the obstacles and coffins reachable from each entrance are consistent for each floor. This table covers each possible route (in NESW order), in the order it is encountered, with the suggested approach. 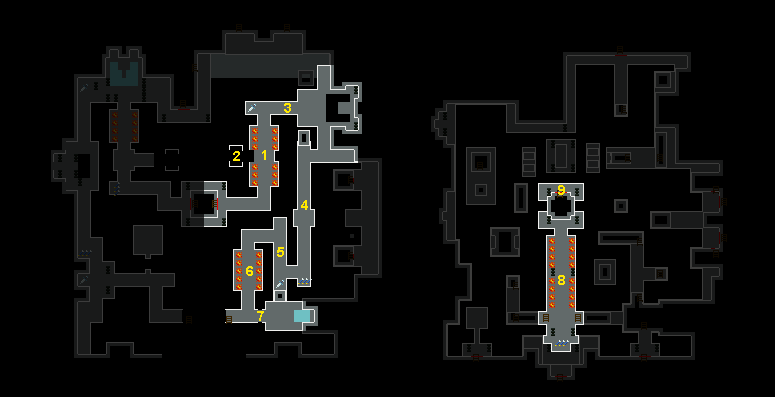 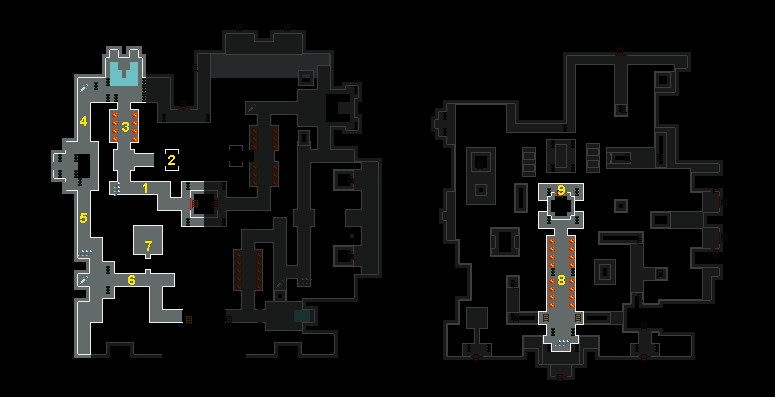 Only has a single path across the levels leading to the Grand Hallowed Coffin. Flame statues on this floor change phases 1 tick faster than on floors 1-4.