From Old School RuneScape Wiki
Jump to navigation Jump to search
The RuneScape Wiki also has an article on: rsw:Hallowvale
This article is about the historical region. For the quest, see Darkness of Hallowvale. 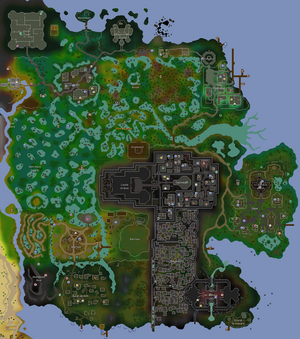 A map of Hallowvale in the current day.

Hallowvale (sometimes referred to as Hallowland) was a former kingdom that was once ruled by a Saradominist race known as the Icyene during the Second Age and early Third Age.[1] The kingdom was once a fertile, arable land with forests and farms,[2] but fell to the Vampyres during the God Wars, after which it was renamed Morytania.[3] The capital was the large city that is now known as Meiyerditch.

One of the major areas of the kingdom was known as Everlight, a lighthouse east of what is now Ver Sinhaza in which newcomers from the icyene homeworld arrived. The kingdom was also known to have hosted some form of competitive sports festival known as the Dominion Games.[4]

Hallowvale, dubbed after the family who ruled and presumably founded the kingdom,[5] was founded some time during the Second Age, after the arrival of the Icyene from their homeworld. It encompassed much of what is now south-eastern Morytania, with a small portion of the north-western side, containing the fortress of Kharyrll, falling under the control of Zaros.

For the entirety of its existence, Hallowvale was ruled by Queen Efaritay, who later wedded a human husband named Ascertes, which was initially seen as a controversial marriage. This was because humans living in Hallowvale were oftentimes treated as second-class citizens; for example, marriage ceremonies could only be held at the Acropolis if either of the newlyweds were an icyene.[6] In addition, within the Hallowed Sepulchre, where Hallowvale's dead were buried, humans and icyene were buried on different levels.[7]

At the beginning of the God Wars during the Third Age, Lowerniel Drakan and his army of vampyres invaded the kingdom after Zamorak's return, when Zamorak gave Drakan permission to conquer the kingdom for his own.[8] Efaritay, who was also a renowned botanist, bred all manners of plant life to use against the vampyres, the most notable of which was the hardy Blisterwood Tree found in the heart of the city,[9] which, alongside the powers of light that the icyene had that were lethal to vampyres, resulted in heavy losses among the vampyres. During this time, the Archpriest of the Unicorn and his followers also began to create safeguards for the Hallowed Sepulchre[10] to prevent the vampyres from gaining access to the secrets and treasure within, should the kingdom fall.[11]

Despite the heavy casualties among his army, Lowerniel and his legion of vampyres were set to successfully conquer Hallowland.[12] Although Lowerniel didn't mind the losses, seeing death in battle as a noble one,[13] many others did not share that view, one of them being his brother, Ranis Drakan. He infiltrated Queen Efaritay's castle in the south-eastern part of the capital and captured Ascertes;[14] on the same day, she walked into Lowerniel's camp and surrendered, hoping that he would spare her husband's life.[15][16] However, that was not the case; Efaritay was captured, with her ultimate fate known only to Lowerniel,[17] while Ascertes underwent vampyrification, a process which was used by the vampyres to quickly restore their dwindling numbers, and became Vanstrom Klause.[18] Upon being transformed into a powerful vampyre, the first thing that Vanstrom did was murder his daughter, Larina, and attempt to murder his son, Safalaan, who was able to repel Vanstrom with his innate Icyene abilities and escape; this caused Safalaan to lose his memory.

Upon capturing Queen Efaritay, morale in what remained of her army was lost, and the tide of the conflict turned; Phosani, the Justiciar of the Wolf, alongside her companions Insela and Otrava, felt that Saradomin had abandoned them,[19] and they soon defected to the armies of Zamorak, pledging their allegiance to Drakan and making tithe offerings of the surviving Hallowvale peasantry through trickery and deceit.[20]

With Hallowvale fallen, Lowerniel renamed the kingdom Morytania, and soon began rebuilding over the remains of Hallowvale, creating Darkmeyer and Meiyerditch, as well as enslaving the remaining humans who lived there and instating the blood tithe system as a means of farming their blood for sustenance. Efaritay's castle was renamed Ver Sinhaza and was given to Lady Verzik Vitur, the head of House Vitur.