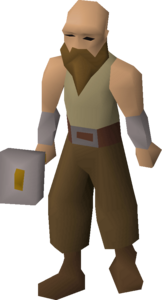 Hammerspike Stoutbeard is a dwarf gangster who plays a part in the One Small Favour quest. He is located in the most western portion of the Dwarven Mines.

The favour that he requires is to convince Sanfew to allow him to become a druid, but he ultimately turns away from this wish and attempts to kill the adventurer instead, using his Dwarf gang members.

Towards the end of the quest, he pledges to get his revenge.