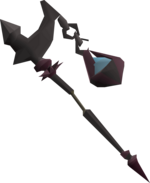 The harmonised nightmare staff is a staff that is created by attaching a harmonised orb to the Nightmare staff. Requiring level 75 Magic and 50 Hitpoints to wield, it can autocast offensive standard spells, but cannot autocast Ancient Magicks unlike its other variants. The upgraded staff is untradeable, but it can be reverted to its tradeable components at any time. If lost on death in the Wilderness, the killer will receive the staff and the orb.

Due to the increased attack speed, the harmonised nightmare staff allows standard combat spells to have damage output competitive with the powered staves; casting Fire Surge with the staff along with a charged tome of fire is particularly effective against monsters weak to magic, such as Zulrah, The Nightmare's pillars, and Kraken, albeit without the passive healing and venom provided by the Sanguinesti staff and trident of the swamp respectively.