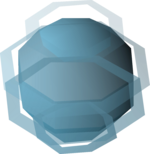 Once belonging to the shamans of Ashihama, the orb was used by the shamans to adapt the nightmare staff, its true name long since lost to the world, to any task, which gave them complete power over the island until the arrival of The Nightmare.

For an exhaustive list of all known sources for this item, see here (include RDT).
Retrieved from ‘https://oldschool.runescape.wiki/w/Harmonised_orb?oldid=12732368’
Categories: