Hazeel Cult is a novice quest that was released on 15 August 2002. It was the second quest to feature a Mahjarrat, and introduces Hazeel, a Zamorakian Mahjarrat that has been put into a state of torpor, and his followers are attempting to revive him in time for the next Ritual of Rejuvenation.

{"requirements":"Able to defeat a level 13 monster (this applies only if you're taking the good side of the quest)","desc":"Discover the truth behind the Carnillean family fortune. Decide for yourself whether to aid the Carnilleans in retrieving stolen goods, or join the Hazeel cult members in their mission to resurrect the infamous Lord Hazeel.","difficulty":"Novice","kills":"None","name":"Hazeel Cult","start":"Central [[Ardougne]], south of [[King Lathas]]' [[Ardougne Castle|castle]]. Talk to [[Ceril Carnillean]].","length":"Short","items":"None\n\n'''Recommended:'''\n*An [[Ardougne cloak 1]] or higher helps save quite a bit of walking by giving teleports to the monastery. [[Energy Potion]], [[Stamina Potion]] or the full [[Graceful outfit]] are useful, but in no way essential."}

You will have a choice between two sides in this quest. You can either choose to help Ceril Carnillean get his family armour back and foil the plan to revive Hazeel, or you can choose to help Hazeel's followers murder a Carnillean and resurrect their master. Siding with Ceril can be considered the "good" choice, while resurrecting Hazeel can be viewed as the "evil" choice. 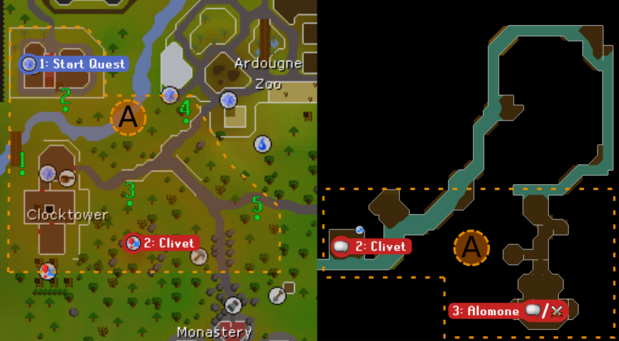 To begin, head to the south-western corner of Ardougne. After speaking with Ceril, walk south and cross the bridge. Go east of the clock tower, and enter cave (south of Valve 3 on the side). Talk to Clivet, (make sure you right click on him, otherwise it causes you to attack) to learn about Hazeel, an ancient and powerful follower of Zamorak who was killed by an ancestor of Ceril. He will ask for your help in reviving Hazeel. Refuse. (It is important you ask him what he means, rather than choosing the "you're talking rubbish"-option. Otherwise you will not be able to get the armour from killing Alomone.)

Clivet will sail away on a raft, saying that you'll never be able to find him. You need to find five Sewer valves and turn them the proper direction.

After you've turned all five, go back into the cave and take the raft to the cult's hideout. Talk to Clivet at the entrance, then board the raft. Talk to Alomone. He will tell you that the Carnilleans' butler should have killed you by now. He will then attack you. Kill him to get the Carnillean armour. If you'd like an extra one for yourself, drop the armour and kill Alomone a second time, and pick up both armours.

Note: Alomone can be killed with a Dwarf multicannon.

Re-board the raft in order to return to the sewer entrance. Back at the Carnilleans' house, talk to Butler Jones, followed by Ceril Carnillean on the 1st floor[UK]2nd floor[US] of the house. He'll take the armour from you and give you 5 coins, but won't believe you about Butler Jones. 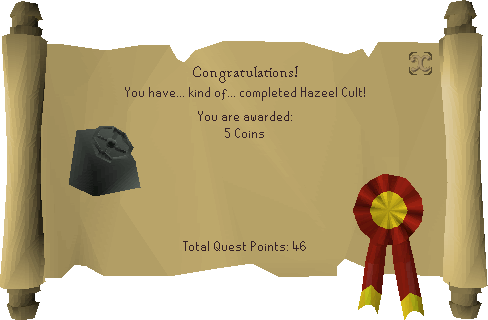 Search the cupboard on the 1st floor[UK]2nd floor[US] and you will find the Mark of Hazeel and a bottle of poison. Show these to Ceril. He will fire Butler Jones and give you your reward.

Talk to Ceril Carnillean and accept to help him, then walk south from Ceril's house and cross the bridge. Go east of the clock tower, and enter a cave (south of Valve 3 on the map below, marked as "2: Clivet"). Talk to Clivet to learn about Hazeel. Be careful not to accidentally attack him, right click and select "Talk", he will explain that Hazeel is an ancient and powerful follower of Zamorak who was killed by an ancestor of Ceril. He will ask for your help in reviving Hazeel. Accept.

The first thing you need to do is kill a member of the Carnillean family. Go to the basement of Ceril's house, and use the bottle of poison that he gives you on the range. Then, go upstairs and talk to one of the Carnilleans to learn that Scruffy, the dog, is dead.

Talk to Clivet again to begin the next part of the ritual. He'll give you Hazeel's mark, then tell you to find the cult hideout. You need to find five Sewer valves and turn them the proper direction. This can be done by right clicking the valves, and selecting "Turn Left" or "Turn Right" in accordance to the checklist below.

Hazeel emerges from his coffin.

Go back to the cave and board the raft. Once you're in the main hideout, talk to Alomone. He'll tell you to find a scroll. Go back to the Carnilleans' house.

Talk to Butler Jones; then, search the crates in the basement for a key (make sure to finish the dialog to get the key in your inventory). Go up the ladder, then up the stairs and knock on the wall in the east room, on the northern side, then finally go up the ladder. Use the key on the chest to get the scroll. Return to Alomone to start the Hazeel's resurrection. 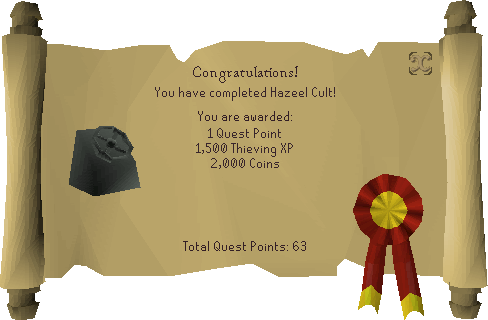 Carnillean armour can be obtained during quest if you sided with Ceril and get one extra for during quest.