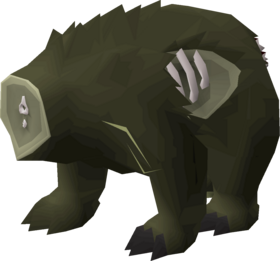 The Headless Beast is a headless undead bear encountered during the Getting Ahead quest, it was resurrected by the inexperienced necromancer Neilan Redmark. The Headless Beast attacks mainly with melee. It has a special attack where it slams the ground, causing a rock to fall from the ceiling onto the player's current location, dealing 12-16 damage. This can easily be avoided simply by moving one tile away in any direction. Immune to movement inhibitors from ice spells, bind, snare, and entangle.

The Headless Beast can be easily defeated by using the small body of water as a safespot to kill it with Ranged, Magic or a halberd.

After it is slain, cowhides no longer appear in the Headless Beast's cave. 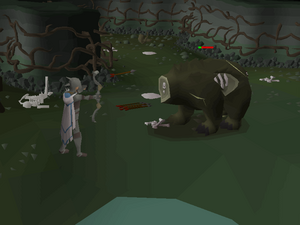 A player fights the Headless Beast from a safespot.