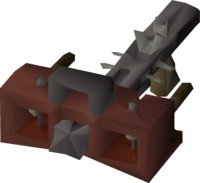 The heavy ballista is a two-handed ranged weapon that uses javelins as ammunition, requiring level 75 in Ranged and the completion of the quest Monkey Madness II to wield. While there is no actual defence requirement for the Heavy Ballista, completing the pre-requisite, Monkey Madness I, provides a minimum of 20,000 defence experience. This corresponds to an effective requirement of 33 defence.

It is created by using ballista limbs on a heavy frame, then using the resulting incomplete heavy ballista on a ballista spring, and finally adding the monkey tail on an unstrung heavy ballista. The entire process requires 72 Fletching and grants 660 experience.

The speed on accurate is one tick slower than a godsword (7 ticks), but when put on rapid it matches the speed of a godsword (6 ticks). The ballista has an attack range of 9. Longrange increases attack range by 1.

Ava's device does not pick up fired javelins as they will always break on impact.

The heavy ballista has a special attack, Concentrated Shot, which it shares with the light ballista. It performs an attack with 25% increased accuracy and damage.