Hell-Rat Behemoths are found in Evil Dave's basement in Edgeville and can only be accessed after completing the Evil Dave subquest in Recipe for Disaster. They guard a 4 dose coloured spice (red, yellow, orange, or brown) and must be killed in order to obtain it.

The locations of the coloured spices the Behemoths guard.

Hell-Rat Behemoths are caught by having a cat enter the curtains and fight them, just like the King rat during the Ratcatchers quest. The player will then enter an instanced area where their cat and the rat will face off. Should the fight prove to be too difficult, players can walk away to exit the instance with their cat unharmed. Hell-Rat Behemoths have the following combat stats:[1] 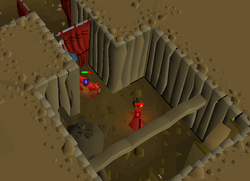 A hell cat and a Hell-Rat Behemoth face off.

The player can give their cat fish or milk to heal them by using them on the curtain. Since all food given to your cat heal for the same amount, raw karambwanji is the best type of food, allowing to obtain multiple spices without having to bank. It is highly recommended that players use wily cats to kill Hell-Rat Behemoths as they can kill them quickly and efficiently. If the cat dies during the fight, it is permanently lost and players will have to obtain another kitten from Gertrude. It should be noted players can also use overgrown cats to fight in the instance.

When successfully defeated, the player will exit the instance and will automatically be given the four-dosed spice that the Behemoth was guarding. If the player's inventory is full, it will be dropped on the floor right under the player.

If a player is assigned to kill rats as a Slayer task, defeating a Hell-rat Behemoth will count as a kill towards the task and award 15 Slayer experience.