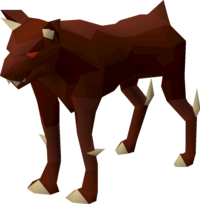 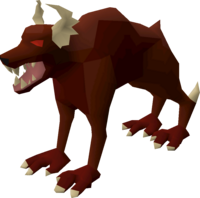 Hellhounds are demonic creatures so demonbane weapons will work against them. As their combat level suggests, hellhounds are not easy to defeat. It's worth noting, however, that their high combat level is mostly reflective of their accurate and powerful attacks; hellhounds have low defensive stats. Players with a low Defence level should bring the best armour that they can afford as well as high healing food.

As they only attack with Melee, the Protect from Melee prayer can be used to nullify their attacks. The most effective yet AFK-able way to use this strategy is at the Catacombs of Kourend, as the area is a multi-combat zone. Players who have completed at least easy tasks of the Ardougne Diary can teleport to Kandarin Monastery to recharge Prayer points, and teleport back via Xeric's talisman's Xeric's Heart option (requires full completion of Architectural Alliance) or the Kourend Castle Teleport spell (requires 69 Magic and reading Transportation incantations to unlock the spell). Alternatively, a player-owned house altar and Kourend portal may be used. Bring prayer-boosting armour such as the Proselyte armour for longer trips and some food just in case you run out of Prayer points and get hit by the hellhounds.

Prayer "flicking" can dramatically reduce the cost of fighting them; however, this requires close attention and probably some food to correct mistakes. Since they occupy a large space of 2-by-2 squares, hellhounds can easily be safespotted in Taverley Dungeon on rocks and columns, or in the Witchaven Dungeon. In the Karuulm Slayer Dungeon, they can be safespotted with range at the entrance by staying against the north wall and luring the two northern spawn Hellhounds towards the entrance. They may also be safespotted in the Kourend dungeon by ranging them from the south of the room, using the corner of the entry hallway to block.

Players hunting hard clue scrolls can kill hellhounds located east of the Deserted Keep while wearing a ring of wealth (i). This doubles the drop rate of clue scrolls from hellhounds, from 1/64 to 1/32.

If a Slayer Master is checking your combat level, you are required to have at least level 75 combat.

Ensouled hellhound heads can be sent to the bank with a charged Soul bearer.

The average hellhound kill while on a Konar task is worth 1,865.65.

There is approximately a 85/100 chance of rolling the Wilderness Slayer Cave drop table, which includes various items available from Justine's stuff for the Last Shopper Standing.